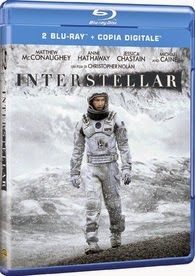 Set in an undisclosed future time after a worldwide blight has driven much of the first world, including America, into a largely agrarian society, an ex-pilot turned farmer (Matthew McConaughey) is recruited by the secret remains of NASA through it’s terrestrial mission leader/astrophysicist (Michael Caine) to journey to another galaxy where there are three potential habitable worlds that humans can immigrate to or at the very least restart humanity as a colony by seeding it and shepherding fertilized embryos if the problem of gravity proves unsolvable and dooms humanity to extinction on Earth. The method of travels relies upon an orbiting conventional NASA spaceship to journey to Saturn where a wormhole was discovered and is presumed to be the result of a higher dimensional intelligence trying to give humanity a chance at survival amongst the stars. Though the sacrifice means he must leave his family behind with no guarantee as to when or if he will return. The only guarantee he knows if he does not go, the next generation to follow his children will be the last. Thus Filmmaker Christopher Nolan takes the audience on an incredible journey with a seemingly ordinary man on an extraordinary adventure in Interstellar.

Matthew McConaughey seems better suited to his role in Interstellar than he did nearly twenty years earlier when he starred in the big screen adaptation of Carl Sagan’s Contact and it is hard not to compare both films especially since both were produced by Lynda Obst and had Astrophysicist Kip Thorne as an advisor. Both films feature representations of wormholes and for their time were in the case of Contact and is as far as I know with Interstellar, scientifically accurate visions of space exploration and the profound complexities that lie therein. They are also both films about faith and in some ways I think Contact and Interstellar share a lot more thematic similarities than one might first discover despite the differences within the elements of the storytelling, including action, characterization, method of travel and ultimately a single unifying quality that bridges both films together, which is to say there is more than a theory of gravity that unites the dimensions traversed in each film. The more I think of it, the more I am inclined to want to watch Contact again because while the elements are different, they both tell very similar stories.

Paramount Home Entertainment has given Interstellar a truly special multi-format release that qualifies itself in my opinion as one of the best Blu-ray Disc releases so far this year beginning with an outstanding 1080p/24fps (where available) cinematic presentation that captures as close as possible the shifting aspect ratios for the IMAX version and only the Blu-ray Disc presentation features this recreated exhibition for home video. It looks stunning and it reminded me how great Blu-ray Disc can be in terms of picture clarity. The Blu-ray Disc presentation is noticeably sharper and more vibrant than the Digital Copy that can be redeemed for free via an included redemption code for a limited time with a choice of either an I’Tunes, Ultraviolet or Google Play Digital Copy. If given a choice I prefer I’Tunes over both Ultraviolet and Google Play so watching the film stream on Apple TV was the only way I could screen the high definition Digital Copy since you must choose one. You don’t get all three. The Science Of Interstellar (50:18) is included with the I’Tunes Digital Copy as well as a rudimentary onscreen menu system accessible on Apple TV. The documentary is also included on the second Blu-ray Disc containing the extra value materials within the set. English DTS-HD MA 5.1 and French and Spanish Language Dolby Digital 5.1 Surround Soundtracks are also included along with an English Descriptive Audio Track and English Subtitles for the Deaf and Hearing Impaired as well as English, French, and Spanish Language Subtitles as options. The standard definition DVD includes nearly identical audio option except the English Soundtrack is Dolby Digital 5.1 Surround Sound and not DTS-HD MA 5.1 as on the Blu-ray Disc. The Subtitle options are about the same. The DVD release even when upconverted to 1080p looks washed out when compared to the image quality on both the Blu-ray Disc and I’Tunes Digital Copy presentations. The DVD features bonus trailers for Terminator: Genysis, The Gambler and Selma as one reel (7:40).

Besides the engaging Science Of Interstellar documentary, there are a series of informative featurettes that can be viewed individually, but not as one larger documentary through a “Play All” option. While I think that choice should have been included, I can honestly state that watching all of these vignettes kept my attention and gave insight that reinforces the idea that a good behind-the-scenes feature length documentary can indeed rival a feature length audio commentary track that this release lacks. The subjects covered are under the headings Plotting An Interstellar Journey (7:49), Life On Cooper’s Farm (9:43), The Dust (2:38), TARS and CASE (9:27), The Cosmic Sands Of Interstellar (13:40), The Space Suits (4:31), The Endurance (9:24), Shooting In Iceland – Miller’s Planet/Man’s Planet (12:42), The Ranger and the Lander (12:20), Miniatures In Space (5:29), The Simulation of Zero G (5:31), Celestial Landmarks (13:22), Across Dimension and Time (9:02) and Final Thoughts (6:02). English, French and Spanish Language Subtitles are encoded onto the Blu-ray Disc as options. The Interactive menus on the two Blu-ray Discs have an elegant quality to them and are easy to navigate. A free collectible IMAX Film Cell from an actual 70mm film print three inches wide is also include within the three-disc single-size Elite Blue BD Case.


All Rights Reserved.
Posted by GenreOnline.net at 5:22 PM