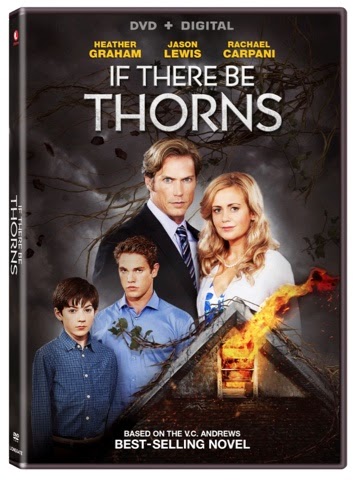 Box-office star Heather Graham (The Hangover) reprises her acclaimedrole as family matriarch Corrine Foxworth in Lifetime®'s If There Be Thorns arriving on DVD (plus Digital) June 23 from Lionsgate Home Entertainment. Based on V.C. Andrews's bestselling "Dollanganger" series of books, If There Be Thorns is the third installment, following Petals on the Wind and the highest-rated made-for-cable movie in 2014,Flowers in the Attic, shadowing the tragically dysfunctional Dollanganger family as they try to escape their past, only to find out there are some things you can never leave behind. Jason Lewis (HBO's "Sex and the City") and Rachael Carpani (TV's "McLeod's Daughters") star as Corrine's children, Christopher and Cathy, with Mason Cook (TV's "Legends") as Cathy's son, Bart. Following the TV broadcast premiere in April, If There Be Thorns will be available on DVD for the suggested retail price of $14.98.

The Dollanganger saga continues with If There Be Thorns, based on the third novel in V.C. Andrews's best-selling "Flowers in the Attic" series. Although Christopher and Cathy have escaped Foxworth Hall and live together as man and wife in California with Cathy's two sons, Jory and Bart, the dark past is always lurking behind. When a mysterious woman moves in next door and befriends Bart, he begins a strange transformation. In fact, it is Corinne, and she introduces Bart to his evil great-grandfather's diary. Bart accuses his parents of being the "devil's spawn" as the secrets of the past are held to the fire.

Posted by GenreOnline.net at 2:29 PM