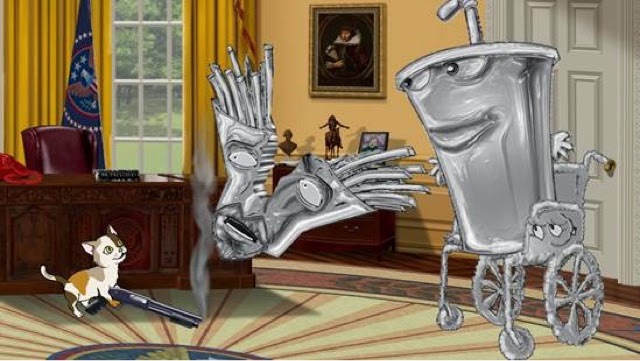 Your favorite trio of human-sized fast-food products living in New Jersey is back for their thirteenth and final season. Join the tasty gang for the premiere of Aqua Teen Hunger Force Forever on Sunday, June 21st at Midnight (ET/PT) on Adult Swim.

For over a decade Meatwad, Master Shake and Frylock have electrified the entertainment world with the antics of Aqua Teen Hunger Force, the detective skills of Aqua Unit Patrol Squad 1, the edgy coming-of-age romp of Aqua Something You Know Whatever, the planet wide hit Aqua TV Show Show and finally the latest offering of invasive bodily entertainment, Aqua Teen Hunger Force Forever.

Brace yourself as Meatwad (Dave Willis), Master Shake (Dana Snyder) and Frylock (Carey Means) enter your mind through your heart - through a quick, secret surgical procedure dubbed Aqua Teen Hunger Force Forever. Developed by North Korean scientists in the late 1990s, Aqua Teen Hunger Force Forever will give you a thick pipeline of entertainment that your Mom will hate, and just one use will make your face look weeks older!
In this latest installment of the fantastic adventures of Meatwad, Master Shake, Frylock and Carl, a court ruling has made divorce illegal in America. Heavily-armed, unhappy couples across the continent are tearing each other apart, and it's up to Aqua Teen Hunger Force Forever to give them the marriage counseling they need. Getting completely nude and replacing their bodies with shape-shifting liquid metal, the Aqua Teens travel through time to try and mend frayed marriages. Along the way, they must follow a recipe and prepare an unfamiliar dish, with a cast of celebrity chefs judging their every move. Prepare yourself for mediated arguments, crying children and burnt food!
The series is created by Dave Willis (Your Pretty Face Is Going To Hell,Squidbillies) and Matt Maiellaro (Space Ghost Coast To Coast).
Adult Swim (AdultSwim.com), launched in 2001, is Turner Broadcasting System, Inc.’s network offering of original and acquired animated and live-action series for young adults. Airing nightly from 8 p.m. to 6 a.m. (ET/PT), Adult Swim is basic cable’s #1 network and is seen in 96 million U.S. homes.
Turner Broadcasting System, Inc., a Time Warner company, creates and programs branded news, entertainment, animation and young adult media environments on television and other platforms for consumers around the worl