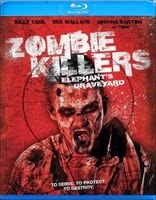 Zombie Killers: Elephant’s Graveyard is a middle of the road type of undead horror film in that it is definitely not a bad film, but at the same time I do not consider it to be a terrific flesh eating ghoul horror picture either. Written and Directed by B. Harrison Smith, who likens himself to John Carpenter in that he casts actors he has worked with before for in his features, Smith’s take on the zombie horror subgenre has a mix of good ideas that are well executed and other ideas that don’t work at all. The film is not gore porn, but that is fine since gore is not scary in a movie alone so much as it is a tool that when used carefully can intensify a scene. I make note of this mainly for those zombie picture fans, who are seeking banquet scenes, they may be disappointed because The Walking Dead on basic cable has more gore than this film save for the makeup effects that are very good. The tone of the film is uneven on several levels. Some actors, particularly the already established pros like an almost unrecognizable Billy Zane and Dee Wallace give okay to good performances depending on the script given, but others simply come off like student film actors and are not at all convincing. This type of mismatching is what ultimately spoils some of the elements, which are well conceived. Since this is a review, I cannot give spoilers, but generally speaking the explanation for the undead plague is interesting though it is a bit reminiscent of Max Kalmanowicz’ The Children (1980) with a similar ecological message. Some of the ideas are never fully explored or seem so outlandish that if it were true then the odds are everyone would be dead already and there would be no story to tell because it would have been too late. Thankfully this is not a found footage feature. The film gets more entertaining in it’s third act, but the conclusion is flat and feels like a setup for a sequel. The low budget hurts the film as well with sets that simply look unbelievable and some middle of the road CGI. As a result Zombie Killers: Elephant’s Graveyard never lives up to the undead ambitions it appears to have.

Anchor Bay Entertainment’s Blu-ray Disc presents Zombie Killers: Elephant’s Graveyard in a widescreen (2.35:1) 1080p high definition aspect ratio that looks matted to me though I cannot state that is the case for certain so I give the filmmakers the benefit of the doubt there. However at times the HD Video simply looks too video like for it’s own good. The English Dolby True HD 5.1 Surround Soundtrack fairs better with a nice ambient quality. English Subtitles for the Deaf and Hearing Impaired and Spanish Languages Subtitles are encoded onto the Blu-ray Disc as options too. Three short featurettes are included with a Blood, Bath and Beyond behind-the-scenes set visit (4:32), a look at how the style and production design were achieved (5:24) and another production short (4:58). The interactive menus are well rendered and easy to navigate. While not a terrible film by any means, Zombie Killers: Elephant’s Graveyard simply never achieves being great. Zombie Killers: Elephant’s Graveyard is available on Blu-ray Disc and sold separately on DVD now at retailers on and offline courtesy of Anchor Bay Entertainment.


All Rights Reserved.
Posted by GenreOnline.net at 3:14 PM