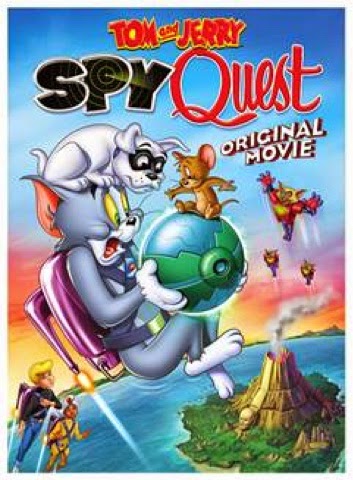 IS AVAILABLE FOR THE FIRST TIME

BURBANK, CA (March 12, 2015) – Warner Bros. Home Entertainment (WBHE) brings popular, classic cartoon characters together in a brand new, action-packed, full-length animated film, Tom and Jerry: Spy Quest. Fans of all ages won’t want to miss this heart-stopping adventure, featuring Tom and Jerry, that tussling twosome, along with Jonny Quest and his pal Hadji from the classic, action-adventure animated series The Adventures of Jonny Quest, as they embark on a dangerous spy mission in order to save the world. This entertaining new title is set for release June 23, 2015, on DVD.  Tom and Jerry: Spy Quest will retail for $19.98 SRP. Order due date has been set for May 19, 2015.

Tom and Jerry: Spy Quest will be available early through EST for download June 9, 2015.

Tom and Jerry set out on one of their biggest, boldest adventures yet in Tom and Jerry: Spy Quest. Get set for intrigue, thrills, suspense and high-action as the animated duo get wrapped up in a top secret, spy-tacular, fun-filled mission the whole family can enjoy together.  It’s just another day at the beach for the dueling Tom and Jerry…that is until they bump into world-class junior spies Jonny Quest, Hadji and their canine companion Bandit. When longtime Quest family nemesis Dr. Zin discovers that Jonny’s father, Dr. Benton Quest, has a device to solve the world’s energy problems, he sends his evil cat army to steal it and capture him and his bodyguard, Race Bannon.  Jonny and his new furry friends set out on an action-packed quest to find his father and save the world from the malicious Dr. Zin.

“We have combined two of our most popular cartoon franchises, Tom and Jerryand The Adventures of Jonny Quest, and created a highly entertaining new film that will appeal to a broad audience,” said Mary Ellen Thomas, Vice President Family & Animation Marketing. She added, “This film presents viewers with an engaging, original new story, eye-catching animation and legendary cartoon characters that have been loved by generations. It offers something for every viewer. We’re excited about the release of Tom and Jerry: Spy Quest.”

Originally created by William Hanna and Joseph Barbera, Tom and Jerry centers on the never-ending rivalry between Tom the cat and Jerry the mouse.  Oftentimes a one-sided battle of wits, a determined Tom is fueled by the quick and clever Jerry who always seems to get the best of him in any situation.

The Adventures of Jonny Quest is the popular action-adventure animated series produced by Hanna-Barbera Productions. The program focuses on Jonny Quest, a boy who goes on extraordinary adventures around the world with his father, Dr. Benton Quest, a leading scientist, their bodyguard, Roger “Race” Bannon, Hadji, Jonny’s best friend and Bandit, their pet dog.  The original television is series is available on DVD from WBHE.

Bonus Episodes from The Tom and Jerry Show:

Posted by GenreOnline.net at 2:49 PM