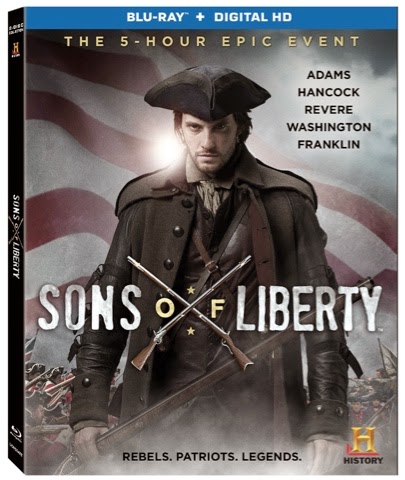 ANTA MONICA, CA (March 24, 2015) - HISTORY®'s latest blockbuster miniseries Sons of Liberty is headed to Blu-ray™ (plus Digital HD) and DVD (plus Digital) May 26th from Lionsgate Home Entertainment. An action-packed, five-hour, scripted miniseries in the tradition of "The Vikings" and "Hatfields & McCoys," and scripted by the writer of HBO's "John Adams," Sons of Liberty features an incredible ensemble cast, including Dean Norris (TV's "Breaking Bad," TV's "Under the Dome"), Ben Barnes (The Chronicles of Narnia), Ryan Eggold (TV's "The Blacklist"), Michael Raymond-James (TV's "Once Upon a Time"), Rafe Spall (Prometheus), Henry Thomas (Gangs of New York), Marton Csokas (The Lord of the Rings: The Return of the King), Jason O'Mara (TV's "Terra Nova") and Emily Berrington (TV's "24: Live Another Day"), whocome together to tell the dramatic interpretation of events that sparked a revolution.

As riots consume the streets of Boston, a dangerous game plays out between a British governor and ringleader Sam Adams, which escalates to extreme measures-street brawls, black market dealings, espionage and murder. A sizzling, romantic affair percolates against a backdrop of rising civil unrest, the infamous Boston Tea Party and Paul Revere's legendary ride. From the Battle of Lexington, a clash between the dedicated colonists and the superior British Army ensues, and the colonies join forces as a single, united country in the most epic revolution of our time.

The Sons of Liberty Blu-ray™ and DVD include over 30 minutes of exclusive, behind-the-scenes special features and will be available for the suggested retail price of $29.99 and $26.98, respectively.

Posted by GenreOnline.net at 6:36 PM