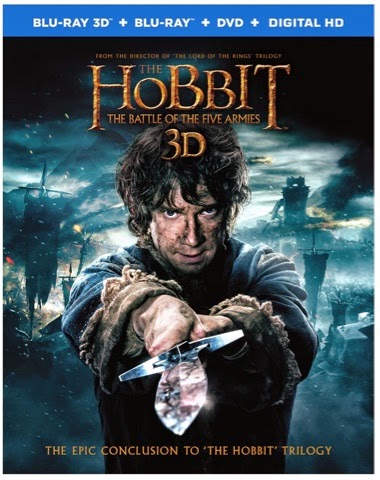 On March 24, 2015, the final installment in Peter Jackson's cinematic adaptation of J.R.R. Tolkien's The Hobbit, which in the case is also the conclusion of a trilogy of Hobbit films that when combined with Jackson's classic adaptation of The Lord Of The Rings Trilogy, serves as a kind of fictional account of the precursor events leading up to and including The War of the Ring as well as what happened after in the early days of the Fourth Age of Middle Earth. Picking up right where the cliffhanger The Hobbit: The Desolation Of Smaug left off, the third installment in The Hobbit Trilogy was originally to be given the subtitle, There And Back Again, but after carefully constructing a second film out of bits and pieces of what would have been originally a two film adaptation of The Hobbit and then adding into it new footage to create in the editing room during production a middle film, the focus for the third film shifted and so the title was changed into The Battle Of The Five Armies for the final film since the idea was this was ostensibly the defining chapter that sets things into motion for The Lord Of The Rings Trilogy and as a war film the film works and of the three it is the most entertaining complete with a 45 minute epic battle filled with Dwarves, Elves, Men, Orcs, Goblins, Trolls, Ogres, Giant Bats and Were-Worms as Sauron scrapes the bottom of the barrel to muster enough force in an attempt to cease control of The Lonely Mountain with the Eagles swooping in once again to help save the day. The film manages to fit itself naturally into The Lord Of The Rings Trilogy so that the viewer can eventually watch all six films from the comfort of wherever they may be in this digital age and view it all as one complete tale.
Warner Brothers Home Entertainment's The Hobbit: The Battle Of The Five Armies Blu-ray 3D, Blu-ray, DVD and UVHD Digital Copy set contains five discs as well as an insert for a limited time only free retrieval of a high definition Ultraviolet Digital Copy of the theatrical cut of the film. The first two discs contain the theatrical cut of the film in 3D and the third disc is the 2D HD copy while the fourth disc contains the extra value features in high definition and the fifth disc is a standard definition DVD copy of the film too. The high definition presentation in both 3D or 2D yields a vibrant and clear 1080p full HD (2.4:1) widescreen presentation. The 3D at times reveals certain scenes in digital effects to greater attention while the clarity of the 2D version does the same with different scenes because of the changes emphasis. The 2D DVD copy looks clear, but after watching the film in HD in both 3D and 2D, the standard definition copy looks a little washed out in comparison. Both the BD-3D and normal 2D Blu-ray versions features an English DTS-HD 7.1 MA as well as Spanish, Portuguese and French Language Dolby Digital 5.1 Soundtracks while the BD-3D copy also features Hungarian and Polish Language options. Both the 3D and 2D HD versions include English Subtitles for the Deaf and Hearing Impaired as well as Spanish, Portuguese, French, Language Subtitles while the 3D version also includes Bulgarian, Hungarian, Polish and Romanian Subtitle options too.
The DVD features English, French and Spanish Language Dolby Digital 5.1 Surround Soundtracks and English Subtitles for the Deaf and Hearing Impaired as well as Spanish and French Language Subtitles encoded as options. All three versions include the somewhat retrospective almost tourist spot quasi hybrid, New Zealand: Home Of Middle Earth (6:07). The fourth BD disc includes the rest of the extra value features, which includes the fantastic two-part documentary Completing Middle Earth (19:59) and a behind the scenes look at the recording of as well as the music video for "The Last Goodbye" by Dominick Monaghan and a behind-the-scenes account of the extras recruited for the Battle of the Five Armies (11:39). The second theatrical trailer (2:33) and a trailer for The Hobbit: The Desolation Of Smaug: Extended Edition Blu-ray set (1:34) wrap up the bonus materials included within this five-disc set. The Hobbit: The Battle Of The Five Armies: Blu-ray 3D + Blu-ray + DVD + Digital HD will debut at retailers on and offline on Tuesday, March 24, 2015 courtesy of Warner Brothers Home Entertainment,
(C) Copyright 2015 By Mark Rivera
All Rights Reserved.
Posted by GenreOnline.net at 1:45 PM