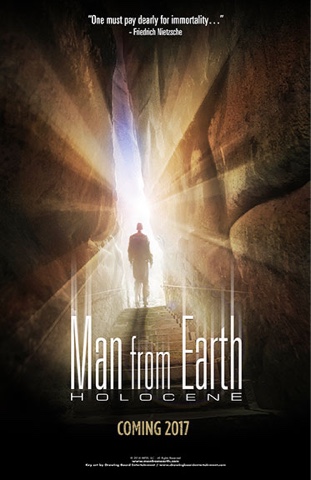 THE MAN FROM EARTH: HOLOCENE,

THE LONG-AWAITED SEQUEL TO THE CULT SCI-FI HIT,

The 2007 original The Man From Earth, written by renowned sci-fi writer/author Jerome Bixby (Fantastic Voyage, It! The Terror from Beyond Space) launched the thought-provoking franchise about college professor “John Oldman” who reveals to his colleagues that he's actually a centuries-old caveman. And so began a captivating journey through history and a philosophical meditation on immortality. The script was the last work from screenwriter Bixby, who earned career accolades for his contributions to such genre-defining shows as “Star Trek" (“Mirror Mirror”, “Requiem For Methuselah”, “Day of the Dove”) and “The Twilight Zone” (”It’s a Good Life”) and poses the provocative question… Is it science-fiction or science-fact?

After The Man From Earth made its debut at the 2007 San Diego Comic Con International Film Festival, the critically-acclaimed film hit the festival circuit and went on to win numerous awards including Best Screenplay and Best Feature at the Rhode Island International Film Festival, before traveling to festivals worldwide including Chile, Argentina, Brazil, Uruguay, Israel, Columbia and more. Following its festival run, the film was released by Starz/Anchor Bay Entertainment and earned a 2008 Saturn Award Nomination for “Best DVD Release” from The Academy of Science Fiction Fantasy and Horror Films that soon cemented its cult status. With over 126,000 votes, the film is currently ranked #45 on IMDb’s Top Science Fiction Films of All Time.

“People have been asking for this since the first movie became a viral phenomenon,” said director Richard Schenkman. “Over the years, I’ve spent time developing this property with the ultimate goal of creating a long form series. I’ve had a lot of help from a number of really talented people, and stunning support from fans all over the world. It’s been a long road, but now that we’re about to start shooting, I could not be more excited. Nervous, of course, but excited.”

Schenkman and Eric D. Wilkinson are producing and Schenkman shares writing credit on the movie with Jerome Bixby’s son, Emerson Bixby, who also serves as executive producer through his Falling Sky Entertainment Banner.  The Man From Earth: Holocene is based on a story by Schenkman & Wilkinson.