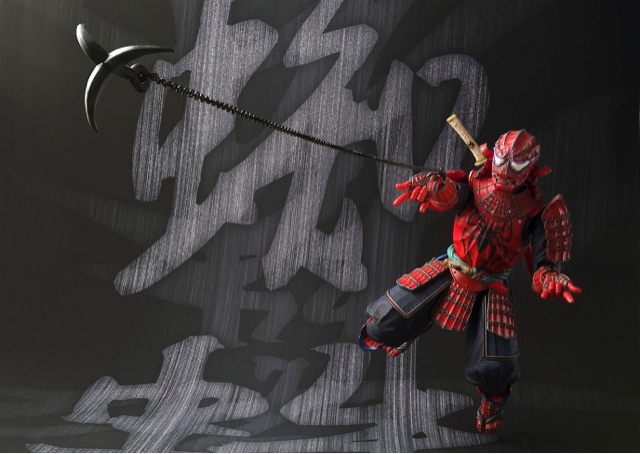 Irvine, CA, May 9, 2016 – Bluefin, the leading North American distributor of toys, collectibles, and hobby merchandise from Japan, proudly announces the newest addition to the hit Meisho Realization figure series from Tamashii Nations as the company reimagines famous superheroes starting with the release of the Samurai Spider-Man later this year.

Scheduled to debut to retailers in late-Summer/Fall, the highly detailed, 7-inch figure pays homage to the Samurai aesthetic and artfully takes Spidey back to feudal-era Japan, casting him in distinctive, web-like black and crimson warrior armor. The figure is exquisitely constructed with hybrid materials and features up to 15 points of articulation to create endless posing possibilities. Meisho Manga Realization Spider-Man will carry an MSRP of $91.99 from authorized Bluefin retailers nationwide and also from a variety of leading online outlets. Preorders are available now.

Collectors also can enjoy several notable figures from the Tamashii Nations Meisho Movie Realization Star Wars product line – available now from Bluefin – that include the “Ronin” Boba Fett, “Ashigaru” Stormtrooper, and the Samurai General “Taisho” Darth Vader and Samurai General “Daisho” Darth Vader. Each is clad in a unique set of armor and comes with an array of weapons and other accessories. Additional new figures will be announced in coming months

Posted by GenreOnline.net at 2:44 PM