The following collaboration can be viewed in it's entirety in Wired magazine at the link below.
http://www.wired.com/2016/05/justin-lin-star-trek-beyond/ 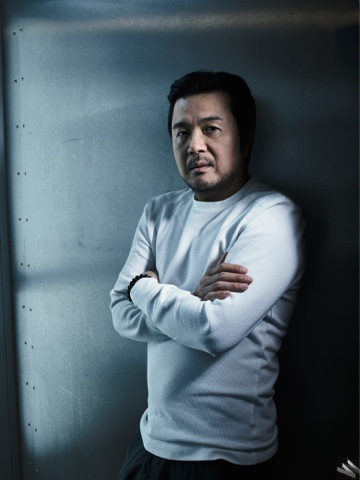 “It was like, hey, this is a rescue mission,” says Lin, a trim 44-year-old with a neatly cropped beard and a quiet, confident manner. Over lunch at an outdoor restaurant in download LA, he grins wryly. “It was, ‘You’ve got six months.”

Abrams, like many Hollywood insiders, knew Lin had, as he put it, “command of a large cast, a great sense of action, a sense of human,” and “an ability to tell stories that would speak to cultures all over the world.”

So, he asked Lin to pitch him something bold. Lin told Abrams he wanted to destroy the Enterprise.

[Lin] wanted to take away every familiar comfort of Starfleet, the bridge, and the recent films to “make the characters as raw as possible,” Lin says, “ and build them back up.”

THE DECAPITATION OF THE STARSHIP ENTERPRISE:

Justin Lin points at the long slender neck of the Enterprise on a monitor. It’s spindly, that diagonal piece leading up to the saucer section, vulnerable. As a kid, he always wondered, why wouldn’t you just attack there?

In a gobsmacking action sequence from Star Trek Beyond, directed by Lin, a fleet of ships attacks in a swarm—shredding and slicing the Enterprise until it’s decapitated. Even thought the frenzied scene is set in the vacuum of space, the action feels visceral, painful, and scary.

ON CRITICISM FROM GEORGE TAKEI ON THE STAR TREK BEYOND TRAILER:

“George has always handled things with class,” Lin says. “He was a huge part of my life, so for him to swing a sucker punch, that hurt.”

He expected snark. He just didn’t expect it to sting. “On Fast, I wasn’t a car guy,” Lin says. “I guess it hurt more because this is something that is part of me.”

His cowriter, Simon Pegg, is less diplomatic. Pegg says he was “disappointed that Wil Wheaton, Patton Oswalt, and George Takei were slagging off the trailer, because they know a finished trailer is never a reflection of the finished film. Get a fucking clue! It’s really good fun: thrilling and heartfelt.”

HOW JUSTIN LIN BROUGHT FAST & FURIOUS BACK FROM STRAIGHT-TO-VIDEO:

The franchise was at a point where we were talking about going direct to video,” former Universal executive Jeff Kirschenbaum says. Lin first turned it down because the script, set in Japan, included clichés of geishas with white studs.

Instead, Lin pitched a fresh vision of a Tokyo that was defined more by familiarity than difference: a global youth culture united by hip-hop, street fashion, and speed. The studio gave Lin just two months to prep, but he delivered an under budget action film with spectacular stunt work: beautiful shots of import cars speeding and gliding through parking lot.

Instead of pandering with tokenism, Lin flexed his natural feel for diversity.

Before Lin took over [Fast and Furious], the first two films pitted ethnic clubs against each other. “It was separate families: the Mexican crew, the homeboy crew,” says [Vin] Diesel, whose production company is called One Race Film. “You didn’t see a multicultural family. The idea that Dom’s brothers are Han and Brian and Roman and Santos—that’s a pretty intense idea.”

The franchise takes on “the lack of diversity in Hollywood with a grin and a popcorn smile,” [Michelle] Rodriguez says.

“I’m going to bring him back,” Diesel says, when asked if Lin will direct the finale. “Whenever we had a day off—even on Thanksgiving, his favorite holiday—it was Justin and me working on how far we could tae it. Success comes from 10 years of that mentality.”

BTW: JUSTIN LIN HAS A SICK WHIP AND DRESSES LIKE STARFLEET:

Today, when that kid who couldn’t afford toy cars walks out to the parking lot, he unlocks a preposterously beautiful black Aston Martin Rapide. “I think it’s the only one with a car seat,” he says, shrugging as he points to the seat in the back of the family car for his 6-year-old-son, Oqwe

WHEN JUSTIN LIN’S FIRST SOLO FILM DEBUTED AT IN 2002:

Better Luck Tomorrow blasted past such stereotyping: It was a coming-of-age crime tale about straight-A Asian American teens who ditch the model-minority myth and sell test scores, then drugs, while partying and snorting more coke than Charlie Sheen.

“It was daring even in the Asian American community,” says [actor John] Cho, noting that the film flew in the face of respectable family melodramas like The Joy Luck Club. “This was youth-oriented and breaking a lot of rules about how Asians were supposed to present ourselves to the world.”

Cut to the 2002 Sundance Film Festival: The premiere kills. The movie is stylish and brash, and nobody know how to sell it.

At a Q&A after a midnight screening, an older guy accuses Better Luck Tomorrow of being “empty and amoral”—but Roger Ebert stands up and shouts, “Nobody would say that to a bunch of white filmmakers: ‘How could you do this to your people?’ Asian American characters have the right to be whoever the hell they want to be!”

JUSTIN LIN ON DIVERSITY AND THE GLOBAL ENTERTAINMENT INDUSTRY:

Lin worries that Hollywood these days sees diversity as a fad. “A casting director told me every person of color she works with is being cast this year in pilot season,” Line says. “But I’ve been in this business long enough to know there are ups and downs.”

While woefully out-of-touch filmmakers have shamelessly pandered, pairing white stars with token minorities, Lin has been a genuinely inclusive pioneer, bringing the cocksure diversity of his scrappy indie films to the multiplex.

Unable to speak English, Lin was sent to the Boys Club of Buena Park, where Coach Bob tapped him and his younger brother, John—the only Asian kids—for the basketball team. They rode the pine, but in the season’s last blowout Line played junk minutes and managed to make one shot.

“It changed my life,” he says, grinning.

At the library, Line learned English by reading biographies of famous Lakers. At the playground, he learned that, in America even assholes respect you when you points on the board. A bully called him “fag” and “gook” every day—until Line beat him at a game of one-on-one.

Lin—5’2” in fifth grade, 5’4” today—played center, then forward, then point guard in high school. He grew up wanting to be a playmaker like his idol, Magic Johnson, after whom he would name his first film company, Trailing Johnson.

JUSTIN LIN ON THE ADRENALINE OF BEING UNDER PRESSURE:

For his part, Lin says he’s learned to tune in to all that buzzer-beating pressure, so that stressful urgency bleeds into the film itself. “I always end up in these volatile situations,” he says quietly. “It’s funny. They say people with lower heart rates tend to be criminals—that’s how they get that jolt of adrenaline. The joke is that my heart rate is really low, and this”—he gestures at the frenzy of the office—“is how I stay alive.”

“Film is similar to a basketball game,” he says. “When that buzzer sounds, win or lose, the only thing you can control is how much effort you put into it.”

In Hollywood, the playing field is hardly level. But like his hero, Magic, Lin works hard to create his own shots—and he’s determined to leave it all on the floor.