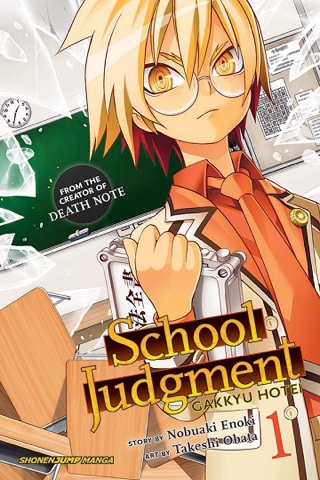 New Thriller By The Artist Of DEATH NOTE And BAKUMAN。

Straight From The Pages Of WEEKLY SHONEN JUMP

Launches In Print And Digitally Next Month!

The new series was created by writer Nobuaki Enoki and Takeshi Obata, the famed manga artist who achieved international acclaim for the hit series DEATH NOTE, BAKUMAN。and ALL YOU NEED IS KILL (all published by VIZ Media). SCHOOL JUDGMENT: GAKKYU HOTEI will debut in print under the Shonen Jump imprint and will carry an MSRP of $9.99 U.S. / $12.99 CAN. The series also launches digitally on February 2nd via VIZManga.com and the VIZ Manga App, as well as from the Nook, Kobo, Kindle, iBooks, comiXology, and GooglePlay stores. New volumes will be published three times a year.

SCHOOL JUDGMENT: GAKKYU HOTEI is set at Tenbin Elementary, where there is only one way to settle a dispute – in a court of law! All quarrels bypass the teachers and are settled by some of the best lawyers in the country…who also happen to be elementary school students. In the opening volume of the series, the accused this time is a boy named Tento. His crime? The murder of a beloved member of the classroom! Luckily for him, the state has sent him a defense attorney–Abaku Inugami. But is this wild young lawyer skilled enough to get his client off the hook?

“SCHOOL JUDGMENT was rated as one of the most successful manga series based on reader surveys from WEEKLY SHONEN JUMP’s Jump Start initiative,” says Marlene First, Editor. “Takeshi Obata’s detailed and riveting artwork is the perfect vehicle to bring Nobuaki Enoki’s courtroom drama to life. Don’t miss the launch next month of this new thriller!”

Manga writer Nobuaki Enoki received the Jump Treasure New Cartoonist Prize in April 2009 for his work, Rikuou. SCHOOL JUDGMENT: GAKKYU HOTEI was his first work to be serialized in Weekly Shonen Jump in Japan and it also appears in the digital English edition published by VIZ Media.

Takeshi Obata first achieved international recognition as the artist of the wildly popular Weekly Shonen Jump title, HIKARU NO GO, which won the 2003 Tezuka Osamu Cultural Prize: Shinsei "New Hope" Award and the 2000 Shogakukan Manga Award. He went on to illustrate the smash hit supernatural crime thriller, DEATH NOTE, as well as the hugely successful manga BAKUMAN。 and ALL YOU NEED IS KILL.