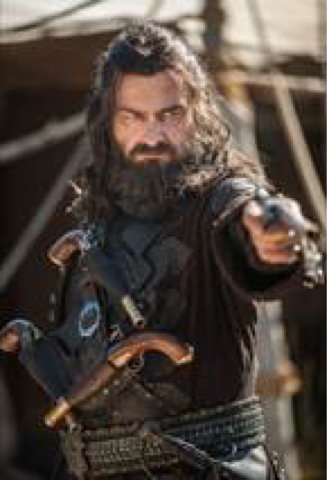 The third season of “Black Sails,”premiering on STARZ on Saturday, January 23rd at 9 PM ET/PT, opens in the wake of the destruction of Charles Town, where the world lives in fear of Captain Flint. When his campaign of terror crosses over into madness, it falls to John Silver to locate the man within the monster.  Meanwhile, with Eleanor Guthrie gone, Jack Rackham and Captain Charles Vane struggle to secure Nassau for the ages.

The ten-episode third season of the authentic high seas drama follows the most feared pirate of the day, Captain Flint (Toby Stephens), and takes place twenty years prior to Robert Louis Stevenson’s classic “Treasure Island.” Ray Stevenson (‘Rome,” Insurgent,Divergent) joins the cast as the iconic pirate ‘Blackbeard,’ and Luke Roberts (“Wolf Hall,” Pirates of the Caribbean: On Stranger Tides) joins as historic figure ‘Woodes Rogers.’  In season three, all are tested when a new threat arrives in Nassau, one the pirates could never have anticipated.  It knows them.  It understands them.  And in the blink of an eye, it will turn them against each other.

Please note readers that the above synopsis was not written by me. It was written by a talented writer in publicity at STARZ. I don't like to take credit for other people's work hence this acknowledgement. Now on to my review. I screened. The first two episodes of the new season, which quickly established Edward Teach AKA Blackbeard as a cool badass kind of character no one should mess with. After that initial introduction we do not see much of Bkackbeard until the second episode, but he definitely leaves an impression.

The drama is ripe with secret affairs, high seas ultimatums, brave gambits in the face of nature and bloody cruel revenge. The pirates are like terrorists and they are not much for bargaining. On the flip side of the coin, the two episodes feel like a part of a larger collective evolution of many of the main characters and promises to hold intrigue as the season progresses. All in all, the third season of Black Sails looks to be off to a good start with promising episodes ahead.

Posted by GenreOnline.net at 4:48 PM