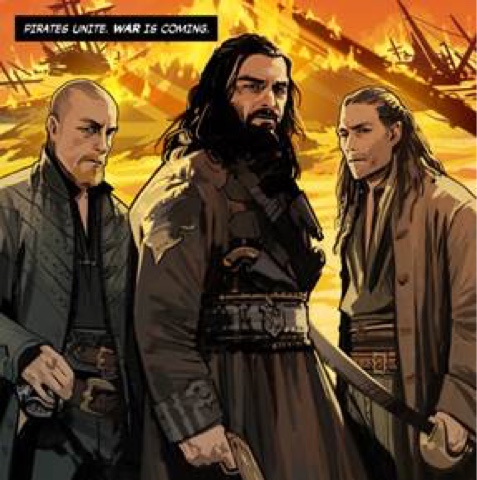 Starz released today the seventh and final graphic novel illustration by celebrated artist and illustrator Fiona Staples created for the STARZ Original series “Black Sails.” The season three image released today follows six previous graphic novel illustrations for seasons one and two also created by Staples, and is the only one to feature the third season of “Black Sails,” which premieres Saturday, January 23rd at 9:00 pm ET/PT only on STARZ. The previously released season one and season two images are available here and below.

Tune in this week for the STARZ Original series “Black Sails” Saturday, January 23rd at 9:00 PM ET/PT. The season three return of “Black Sails” opens in the wake of the burning of Charles Town, where all the New World lives in fear of Captain Flint.  But when his campaign of terror crosses over into madness, and new threats emerge to challenge his supremacy, it falls to John Silver to locate the man within the monster, before Flint’s war against the world consumes them all.

Flint and his crew wage war against the world.  Eleanor receives an offer of clemency.  Vane objects to Rackham’s methods.  One of Nassau’s most notorious returns.