I SAW THE LIGHT debuting on Blu-ray, DVD and Digital July 5 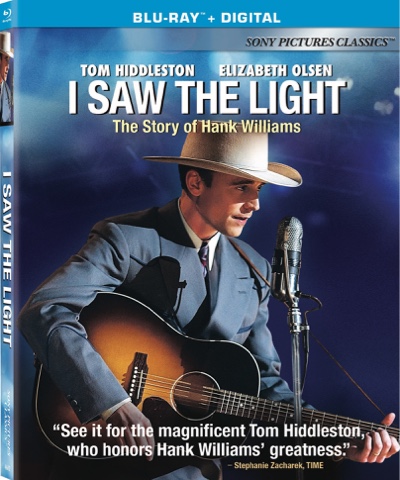 I SAW THE LIGHT

CULVER CITY, Calif. (May 23, 2016) – Tom Hiddleston (Thor & The Avengersfranchises) gives a critically-acclaimed performance as the iconic, tormented singer-songwriter Hank Williams in Sony Pictures Classics’ and RatPac Entertainment’s I SAW THE LIGHT, debuting on Blu-ray®, DVD and digital July 5 from Sony Pictures Home Entertainment. Williams revolutionized country music with his raw charisma, haunting voice and original songs, creating one of the greatest bodies of work in American music. I SAW THE LIGHT, written and directed by Marc Abraham,chronicles his meteoric rise to fame and its tragic effect on his health and personal life, leading to his untimely death at age 29.  The film also stars Elizabeth Olsen (Avengers: Age of Ultron) as William’s first wife Audrey, Cherry Jones (“24”), Bradley Whitford (“The West Wing”), Maddie Hasson (“Twisted”), Wrenn Schmidt (“Boardwalk Empire”) and David Krumholtz (This Is The End).

Bonus features on the I SAW THE LIGHTBlu-ray, DVD and digital releases include two featurettes.  Fans can go behind-the-scenes to explore the making of this intimate and gripping portrait of a musical icon in “Illuminating A Legend: Inside I Saw The Light,” while in “Talking Hank,” Hiddleston and multi-Grammy winner, member of the Nashville Songwriters Hall of Fame and musical director Rodney Crowell sit down with Peter Cooper from The Country Music Hall of Fame to discuss Hank Williams, his music and how Tom prepared to portray the musical visionary. Also included are acoustic performances of “I'm So Lonesome I Could Cry,” “Move It On Over,” and “Long Gone Lonesome Blues.”  Exclusive Blu-ray and digital extras include 10 deleted scenes with introductions from the director Marc Abraham and the featurette “A Night in Nashville: Premiere and Musical Performance by Tom Hiddleston,” where fans join the cast on the red carpet for the Nashville premiere and attend the exclusive after party where Tom Hiddleston performed classic Hank Williams tunes.

I SAW THE LIGHT is the story of the legendary country western singer Hank Williams (Tom Hiddleston), who in his brief life created one of the greatest bodies of work in American music. The film chronicles his meteoric rise to fame and its ultimately tragic effect on his health and personal life. Also starring Elizabeth Olsen, Cherry Jones, Bradley Whitford, Maddie Hasson, and Wrenn Schmidt.

Written and Directed by Marc Abraham and based on the book “Hank Williams: The Biography” by Colin Escott with George Merritt and William MacEwen, I SAW THE LIGHT was produced by Brett Ratner, Aaron L. Gilbert, Marc Abraham and G. Marq Roswell; with Patty Long, Jason Cloth, John Raymonds and James Packer serving as executive producers.

o   “Illuminating A Legend: Inside I Saw The Light”

§  “A Night in Nashville: Premiere and Musical Performance by Tom Hiddleston” featurette

* Commentary available digitally on iTunes only.

I SAW THE LIGHT has a run time of approximately 123 minutes and is rated R for some language and brief sexuality/nudity.