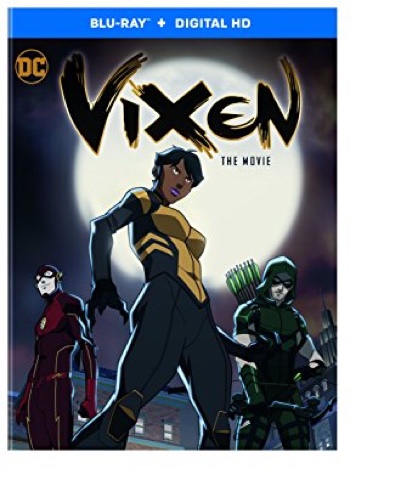 Please note, Warner Bros. Home Entertainment provided me with a free copy of the Blu-ray I reviewed in this Blog Post. The opinions I share are my own.

As seen on the streaming channel, CW SEED, Vixen: The Movie has arrived on Blu-ray Disc complete with a limited time only redeemable code on an insert within the BD case for an Ultraviolet Digital Copy for streaming stationary and mobile devices. The story centers upon Mari McCabe, an African immigrant who lost her family to criminals and now has inherited the Tantu Totem, a device that allows her to harness the power of animals like the strength of a gorilla or the speed of a cheetah. With her amazing abilities, Vixen fights to protect the world from the same threats that claimed her family.

The film is a combination of the CW SEED webisodes and additional animated segments added in order create a 75 minute animated movie. As a result the narrative can be a bit choppy. Vixen: The Movie is presented with a somewhat monochromatic picture quality because of the nature of the story. The 1080p (1.78:1) widescreen aspect ratio presentation is about on par with the average D.C. animated features and comes with an exceptional English DTS-HD MA 5.1 Surround Soundtrack with English Subtitles for the Deaf and Hearing Impaired as well as French and Spanish Language Subtitles encoded as options.

Extra value features besides the above mentioned limited edition Ultraviolet Digital Copy code on the insert within the BD case include Vixen: Sprit Animal (16:13), which features Marc Guggenheim. comic book historian Alan Kistler and voice actors Victor Garber and Carlos Valdes. Two of a Bruce Timm's picks from Justice league Unlimited, which are Hunter's Moon (23:09) and Grudge Match (22:53) wrap up the extra value features on this Blu-ray Disc.

Vixen: The Movie is now available on Blu-ray Disc at retailers on and offline courtesy of Warner Bros. Home Entertainment.