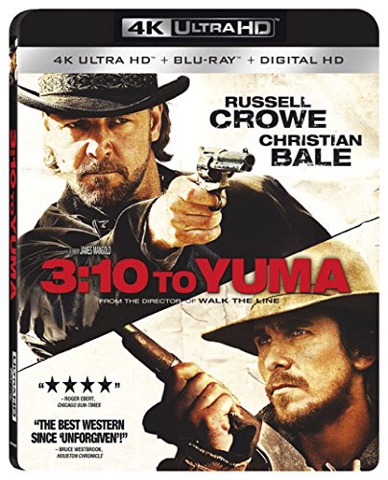 3:10 To Yuma is a remake of a classic western film based on an Elmore Leonard novel and is one of the better Westerns to be released in the 2000s. I also recommend Kevin Costner's Open Range. The film is about a Civil War veteran (Christian Bale), who volunteers to deliver infamous outlaw (Russell Crowe) alive to the 3:10 to Yuma so he can face trial for his crimes and the dangers they both encounter along the way. Lionsgate has released 3:10 To Yuma to Ultra HD 4K with HDR Blu-ray Disc with a beautiful HVEC H.265 codec 2160p picture that presents an improved overall visual quality though since the film is quite gritty at times, the enhancements compared to the 1080p Blu-ray Disc are not always as apparent as one may expect.The English DTS X soundtrack fairs better with a more aggressive and three-dimensional sound field. An English Dolby Digital 2.0 Track optimized for late night listening is also provided along with a Spanish Language Dubbed Dolby Digital 5.1 Surround Soundtrack as well as English Subtitles for the Deaf and Hearing Impaired  and English and Spanish Language Subtitles encoded onto the 4K Ultra HD Blu-ray Disc as options.

The included1080p version on Blu-ray Disc features an English PCM 7.1 and an English Dolby Digital 5.1 Surround EX Soundtrack as listening choices. Subtitles options are basically the same. The 4K disc and HD Blu-ray Disc feature the same extra value materials carried over from the original Blu-ray Disc release that includes a retrospective Audio Commentary Track with Director James Mangold and Picture-Picture storyboard and and behind-the-scenes footage for specific scenes. A historical timeline as well as several featurettes are included like a behind-the-scenes publicity featurette (21:00), a look at the history of the railroad in the old west (20:00), a contextual historical discussion of the old west (13:00), a short on the music composition (8:00), an interview with James Mangold (7:00), a conversation with author Elmore Leonard (6:00), The Guns of Yuma (6:00), deleted scenes (8:00) and the trailer round out the rest of the bonus content on disc. A coupon for a limited time only redeemable free Ultraviolet Digital Copy of the film is also included within the Elite black 4K Ultra HD BD case.

3:10 To Yuma is available on 4K Ultra HD Blu-ray Disc now at retailers on and offline courtesy of Lionsgate Home Entertainment.