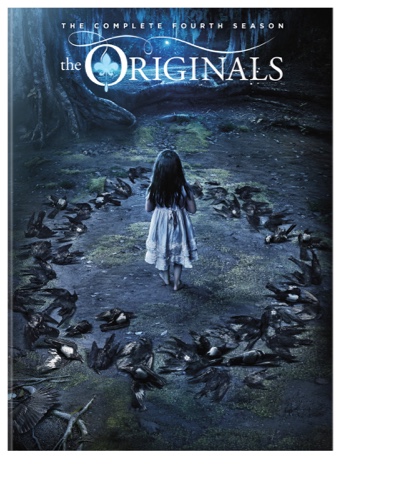 Invite The Mikaelsons Into Your Home, Own the DVD

The Originals Also Available on Blu-rayTM from Warner Archive Collection

Featuring All 13 Episodes from the Fourth Season,

BURBANK, CA (May 23, 2017) – Get ready to feast on The Originals: The Complete Fourth Season as Warner Bros. Home Entertainment will release the DVD on August 29, 2017. Bring a piece of The French Quarter home with all 13 one-hour episodes from season four, the 2016 Comic-Con panel, never-before-seen deleted scenes, and a hilarious gag reel. The Originals: The Complete Fourth Season will be priced to own on DVD at a new low price of $24.98 SRP.

To accommodate fan requests, The Originals: The Complete Fourth Season is also available on Blu-rayTMcourtesy of Warner Archive Collection. The Blu-rayTM release includes all bonus features on the DVD, and is also arriving August 29, 2017. Warner Archive Blu-ray releases are found at Amazon.com and all major online retailers.

Season four of The Originals begins on the fifth anniversary of the Mikaelson family’s greatest defeat. Although Marcel Gerard has ushered in a new era of peace in the French Quarter, an army of unsired vampires has arrived seeking to bargain for the life of Marcel’s infamous captive, the Original hybrid, Klaus. Meanwhile, the other Mikaelson siblings remain in an enchanted sleep Freya designed to keep them safe, buying Hayley time to find a cure for them – while also protecting her daughter, Hope. After a daring rescue, the Mikaelsons are reunited, only to find themselves faced with an even bigger threat: the revival of an ancient evil that has strong ties to their most vulnerable family member. Following a devastating attack by this nightmarish entity, the Mikaelsons discover there is only one way to save themselves – they must stand their ground in New Orleans and forge an alliance with their former friends, both Marcel and the leader of the New Orleans witches, Vincent Griffith. With the city of New Orleans consumed by a seemingly all-powerful cult hell-bent on child kidnappings and ghastly rituals, Klaus must face his own inner demons as he struggles to become the father he never had, to the child he is only now getting to know. Upon learning the truth - that their evil adversary cannot be killed - the Mikaelson siblings will have no choice but to stand together – even if this is to be their final battle.

7.    High Water and the Devil's Daughter

11. A Spirit Here That Won't Be Broken

13. The Feast of All Sinners

The Originals: The Complete Fourth Season is also currently available to own on Digital HD. Digital HD allows consumers to instantly stream and download all episodes to watch anywhere and anytime on their favorite devices.  Digital HD is available from various digital retailers including Amazon Video, CinemaNow, iTunes, PlayStation, Vudu, Xbox and others.

Posted by GenreOnline.net at 6:24 PM