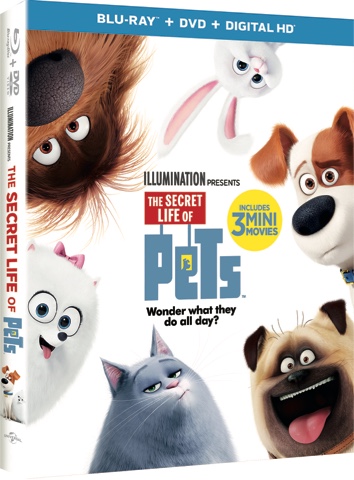 Universal City, California, October 4, 2016 – This holiday season, the answer to the question “Ever wonder what your pets do when you’re not home?” is answered when The Secret Life of Pets comes to Digital HD November 22, 2016 and 4K Ultra HD™, Blu-ray™ 3D, Blu-ray™, DVD and On Demand December 6, 2016 from Universal Pictures Home Entertainment. The humans behind the Despicable Me franchise present America’s top-grossing original film of the year, the animated comedy is a worldwide hit with over $834 million in global ticket sales. The Secret Life of Pets is “non-stop action and laughs,” says Peter Travers of Rolling Stone. The 4K Ultra HD™, Blu-ray™, DVD and Digital HD versions feature nearly an hour of bonus content, including three hilarious mini-movies: the all-new Norman Television and Weenie PLUS Mower Minions which debuted in theaters and is now available to own.

BLU-RAY™ EXCLUSIVES (Available on Blu-ray™editions)
BLU-RAY™ AND DVD BONUS FEATURES
Posted by GenreOnline.net at 11:17 AM