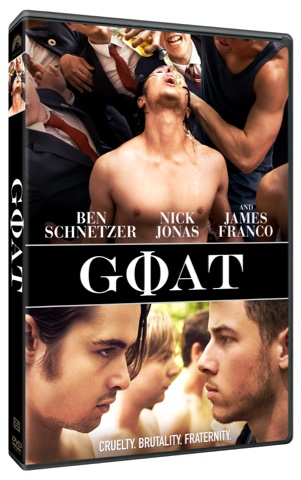 HOLLYWOOD, CA – Lauded as “unexpected and wildly compelling” (Adam Chitwood, Collider) and “brutal and harrowing” (Richard Lawson, Vanity Fair), director Andrew Neel’s gripping drama GOATarrives on DVD December 20, 2016 from Paramount Home Media Distribution.  Based on Brad Land’s memoir, with a screenplay by David Gordon Green, Neel and Mike Roberts, the film had its world premiere at the 2016 Sundance Film Festival where it was a critical success.  Produced by Killer Films and Rabbit Bandini and executive produced by Robert Halmi Jr. and Jim Reeve for Great Point Media,GOAT has been Certified Fresh by Rotten Tomatoes and stars actor-musician Nick Jonas (“Kingdom” on Starz), Ben Schnetzer (Pride, The Book Thief) and James Franco (127 Hours).

GOAT follows a 19-year-old Brad (Schnetzer), newly arrived to college and desperate to belong.  Taking a cue from his older brother Brett (Jonas), Brad decides to pledge a fraternity.  At first, it’s all parties and girls. But as Brad enters into the final stretch of the pledging ritual—known as “hell week”—things take a violent, humiliating turn.  What occurs in the name of ‘brotherhood’ tests both boys and their relationship in brutal ways.