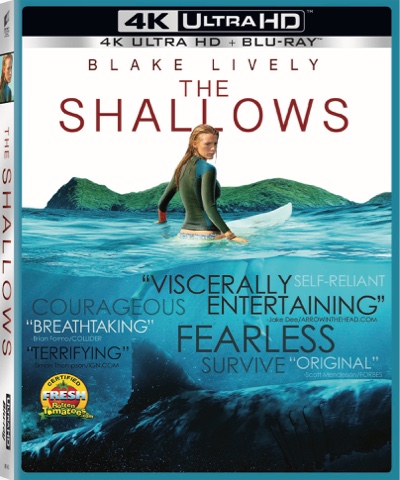 CULVER CITY, Calif. (August 15, 2016) – Blake Lively (“Gossip Girl,” The Age of Adaline) stars in THE SHALLOWS, the suspenseful thriller that taps into one of man’s most primitive fears – what’s lurking beneath the ocean’s surface? Lively stars as Nancy, a surfer attacked by a great white shark a mere 200 yards from the shore of a secluded Mexican beach. As she struggles to survive, Nancy faces the ultimate contest of wills in the movie critics called “terrifyingly good” (Simon Thompson, IGN.com). It’s not just another day at the beach when THE SHALLOWS arrives on digital September 13 and Blu-ray®, DVD and next-generation 4K Ultra HD™ September 27 from Sony Pictures Home Entertainment.

The Blu-ray, DVD, digital and 4K Ultra HD releases come loaded with bonus material, including deleted scenes and four behind-the-scenes featurettes. Join the director, crew and Blake Lively as they discuss the challenges and rewards of shooting in the waters off Lord Howe Island located in the Tasman Sea between Australia and New Zealand in “Shooting in The Shallows,” while “How to Build a Shark” delves into the extraordinary visual effects that make The Shallows a terrifying and visceral experience. “Finding The Perfect Beach: Lord Howe Island” allows viewers to travel with the filmmakers for a behind-the-scenes look at the beautiful, pristine location that provides the backdrop for Nancy's terrifying ordeal, and “When Sharks Attack” offers a harrowing first person account from a shark attack survivor and an expert who explains what makes sharks attack.

In the taut thriller, when Nancy (Blake Lively) is surfing on a secluded beach, she finds herself on the feeding ground of a great white shark. Though she is stranded only 200 yards from shore, survival proves to be the ultimate test of wills, requiring all of Nancy’s ingenuity, resourcefulness, and fortitude.

THE SHALLOWS has a run time of approximately 87 minutes and is rated PG-13 for bloody images, intense sequences of peril, and brief strong language.