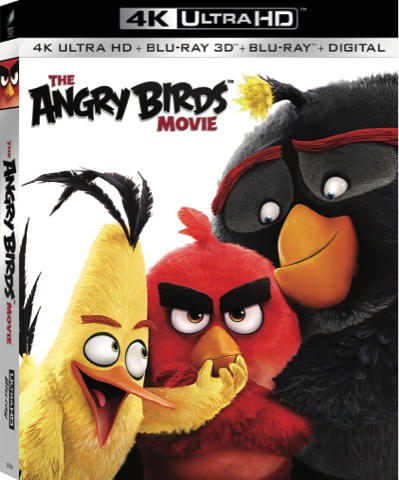 Loaded with Bonus Materials, Including Deleted Scenes, Piggy Dance-Along and the All-New Short “The Early Hatchling Gets the Worm”

CULVER CITY, Calif. (July 6, 2016) – Bring the party home when the hit animated comedy, THE ANGRY BIRDS MOVIE, debuts onto digital July 29 and Blu-ray™/DVD Combo Pack, 4K Ultra HD™/Blu-ray 3D combo pack and DVD Aug. 16 from Sony Pictures Home Entertainment. Based on the most downloaded app of all time (nearly 3.5 billion downloads), the film that catapulted to #1 at the box office in the U.S. and more than 50 others countries takes us to an island populated entirely by happy, flightless birds – or almost entirely. In this paradise, hot-headed Red, speedy Chuck, and the volatile Bomb have always been outsiders. But when the island is visited by mysterious green piggies, it’s up to these unlikely outcasts to figure out what the pigs are up in order to save their home. Boasting an “A” CinemaScore (viewers under age 25) and featuring even more of the breakout, fan-favorite Hatchlings, don’t miss the film that quickly became one of the highest-grossing video game based films of all time.

Bonus content on THE ANGRY BIRDS MOVIE Blu-ray, DVD and digital formats includes a bonus scene; the Blake Shelton Music Video “Friends;” Symphony Mode, which allows viewers to play the movie without all the squawking, just the music; a Character Sketch Gallery, where fans can see drawings and renderings of the birds, pigs and environments from the film; and Music Vignettes with Composer Heitor Pereira. Blu-ray and digital exclusive content includes the all-new short “The Early Hatchling Gets the Worm”, deleted scenes and a series of fun mini-movies featuring the Hatchlings. There are also five additional featurettes including “Dance Along Birds and Pigs,” where fans learn the line dance from the movie; “Crafty Birds,” where viewers learn how to build their own piggy tower; and three featurettes where fans can “Meet the Birds,” “Meet The Pigs” and “Meet the Hatchlings.”

National promotional partners, including top retail and grocery brands, are teaming up with SPHE to offer consumers high-flying deals through a variety of brand integrations. Those partners include: Sonic Drive-Ins, Furniture of America, Mrs. Thinster’s Cookie Thins and Post Malt-O-Meal Cereals.

In the animated comedy-adventure, THE ANGRY BIRDS MOVIE, we’ll finally find out why the birds are so angry.  The movie takes us to an island populated entirely by happy, flightless birds – or almost entirely. In this paradise, Red (Jason Sudeikis), a bird with a temper problem, speedy Chuck (Josh Gad), and the volatile Bomb (Danny McBride) have always been outsiders. But when the island is visited by mysterious green piggies, it’s up to these unlikely outcasts to figure out what the pigs are up to.

The Columbia Pictures/Rovio Animation film is directed by Fergal Reilly and Clay Kaytis from a screenplay by Jon Vitti. Produced by John Cohen and Catherine Winder, THE ANGRY BIRDS MOVIE was executive produced by Mikael Hed and David Maisel.

§  All-New Short “The Early Hatchling Gets the Worm”

§  Crafty Birds – How to Build Your Own Piggy Tower

§  Dance Along Birds and Pigs

THE ANGRY BIRDS MOVIE has a run time of approximately 97 minutes and is rated PG for rude humor and action.