Born This Way Nominated for 3 Emmy Awards, Stigma Busting for People with Disabilities 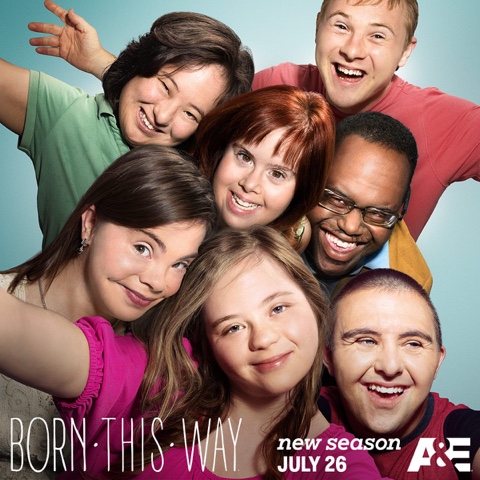 Produced by Bunim/Murray Productions, the series follows a group of seven young adults with Down syndrome along with their family and friends in Southern California. During its first season, Born This Way grew across all demographics each episode, with adults 25-54 up 84 percent, adults 18-49 up 64 percent and total viewership up 67 percent by the end of the season. Recently, the series was chosen as one of six honorees for the 2016 Television Academy Honors, an award that recognizes television programming that inspires, informs and motivates.

RespectAbility has been honored to have been consulted during the creation and production of Born This Way and congratulates the entire team for its hard work in achieving this nomination.

“As detailed in the just-released Ruderman White Paper on Disability in Television, disability often is absent from mainstream film and television – both the depiction of and, even when a character has a disability, the actor often does not,” RespectAbility President Jennifer Laszlo Mizrahi said. “But programs like Born This Way that feature people with disabilities, or that tackle disability issues, in a positive light can be successful both critically and financially. Audiences want to see strong, capable role models with disabilities. By focusing on showing these young individuals' everyday life choices regarding employment, living independently and dating, Born this Way breaks down stigmas surrounding disability.”

According to the U.S. Census, one-in-five Americans has a disability. Currently 70 percent of working-age people with disabilities are not working – even though most of them want jobs and independence. The numbers are even worse for people with Down syndrome. There are many studies that show that people with disabilities, including those with Down syndrome, can work successfully and live relatively independently. The individuals on Born this Way prove that as several are productive employees and one starts her own company.

“By honoring and embracing diversity on television, Born his Way is uniquely redefining the art of honest storytelling and altering the way society views individuals with differences,” Elaine Fontain Bryant, EVP and Head of Programming for A&E said.

The show will be returning for its second season featuring 10 brand-new episodes on Tuesday, July 26 at 10 PM ET/PT. The first season was launched during an event on Capitol Hill hosted by RespectAbility featuring Rep. Brad Sherman (D-CA) and Rep. Cathy McMorris Rodgers (R-WA).

This season, the young adults and their families continue to live with a fresh and honest perspective as the series dives deeper into their personal independence and relationships, including new friends within the community who also will be featured on the show.

Entertainment contributes to the values and ideals that define us; and what we desire to share with our children. What we see, we feel. And what we feel impacts how we act.

RespectAbility encourages arts and entertainment leaders – just as we encourage businesses in every sector – to recognize the disability but respect the ability. We ask them to focus on what people with disabilities can do, rather than on what they cannot. We want the power of arts and entertainment to help move the needle of perception regarding people with disabilities so that people of ALL abilities can achieve the American Dream.

Born This Way will be returning for its second season on July 26, 2016. Don't forget to watch live and tweet using #BornThisWay!

Posted by GenreOnline.net at 12:54 PM