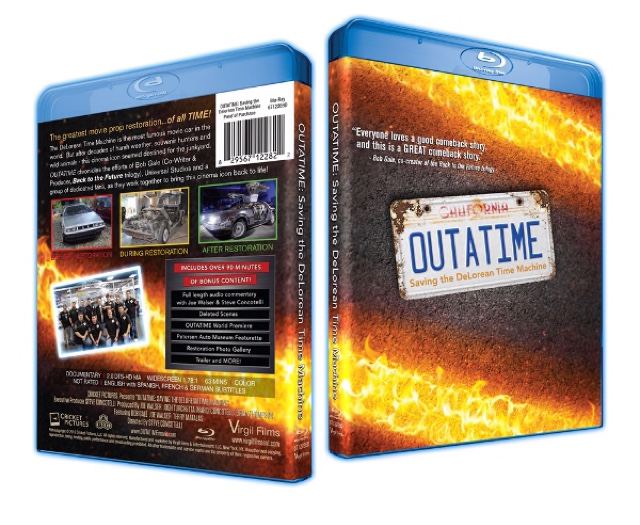 The Restoration of the World’s Most Famous Movie Car

Has Been Fully Documented For All to Enjoy!

HOLLYWOOD, CA – It has been thirty years since the release of the beloved film Back to the Future, featuring themost iconic car in movie history, the DeLorean Time Machine.  While the film’s legacy has thrived over the years - the car itself wasn’t so lucky.  After decades of harsh weather, souvenir hunters and wild animals, the Time Machine seemed destined for the junkyard.

OUTATIME: Saving the DeLorean Time Machine chronicles the efforts of Bob Gale, Universal Studios, and the film’s dedicated fan community as they work together to save this cinema icon.  Together, they embark on the greatest movie prop restoration of all…time!OUTATIME will be available on Digital HD, DVD and VOD on July 19, 2016courtesy of Virgil Films.

To do the restoration right, Bob Gale made a historic choice. Instead of hiring a car company or prop house to restore the car, Mr. Gale brought in a group of Back to the Future super fans to tackle the restoration. By doing so, the Time Machine became the biggest fan-led prop restoration in movie studio history.  Joe Walser (Head of the Restoration) and his team of Time Machine experts had one singular goal – restore the car with 100% accuracy. Every bolt. Every detail. Exactly like it was in the movie. That kicked off an intense, year-long restoration. Grueling work and long hours pushed team members to their breaking point. Even so, their dedication never faltered. As Walser often said, “our pain is temporary, but the car will be perfect forever.”

Working closely with the Time Machine Restoration Team, filmmaker Steve Concotelli was granted exclusive behind-the-scenes access for the entire restoration process. Concotelli interviewed dozens of people involved with the project and the Back to the Future franchise - including Bob Gale, John Murdy, Michael Scheffe, Michael Lantieri, Claudia Wells, members of the Restoration Team, and more.  The result is a fascinating look at the restoration of a movie icon.

Posted by GenreOnline.net at 12:50 PM