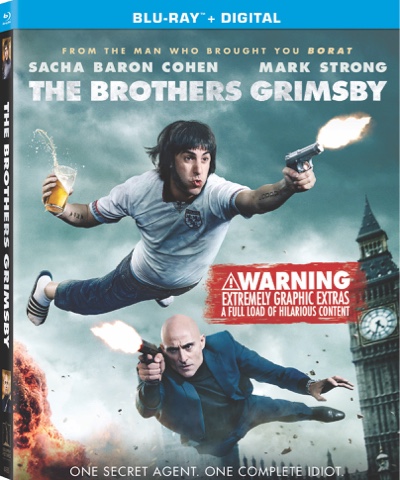 Debuting on Digital May 24

A Full Load of Content Including Hilarious Outtakes, a Blooper Reel,

CULVER CITY, Calif. (Apr. 26, 2016) –From the man who brought you Borat comes the outrageous comedy you have to see to believe, THE BROTHERS GRIMSBY, debuting on digital May 24 and on Blu-ray™ and DVD June 21 from Sony Pictures Home Entertainment. Sacha Baron Cohen stars as Nobby, a dimwitted English football hooligan who teams up with his super spy brother to thwart a global terrorist attack. Cohen is joined by an all-star cast, including Mark Strong (Kingsman: The Secret Service), Penelope Cruz (Pirates of the Caribbean: On Stranger Tides), Rebel Wilson (Pitch Perfect), Isla Fisher (Now You See Me) and Gabourey Sidibe (“Empire”).

THE BROTHERS GRIMSBY Blu-ray, DVD and digital formats are loaded with boundary pushing bonus content, including “The Making of The Brothers Grimsby,” where viewers get a sidesplitting look at how the film was brought to life; and “Line-O-Rama: Hilarious Outtakes”, which showcases the comic improvisation skills of the cast. The Blu-ray and digital formats include even more outrageous content, with deleted and extended scenes, a blooper reel, and the wild featurette “The Elephant in the Room,” which explores how the filmmakers created one of the most talked about scenes in the film.

Nobby (Sacha Baron Cohen), a sweet but dimwitted English football hooligan, has everything a man from the poor fishing town of Grimsby could want, including nine children and the most attractive girlfriend in Northern England (Rebel Wilson). There’s only one thing missing: his little brother, Sebastian (Mark Strong), who Nobby has spent 28 years searching for after they were separated as kids. Nobby sets off to reunite with Sebastian, unaware that not only is his brother MI6’s deadliest assassin, but he’s just uncovered plans for an imminent global terrorist attack. On the run and wrongfully accused, Sebastian realizes that if he is going to save the world, he will need the help of its biggest idiot.

o    “The Making of The Brothers Grimsby”

o   “The Elephant in the Room”

§  “The Making of The Brothers Grimsby” Featurette

The Brothers Grimsby has a run time of approximately 83 minutes and is rated R for strong crude sexual content, graphic nudity, violence, language, and some drug use.

Posted by GenreOnline.net at 1:53 PM