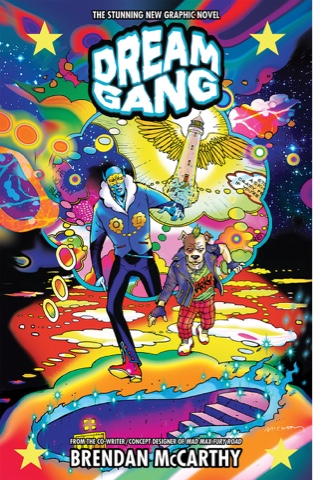 “Dream Gang is a story that takes place in dreams entirely,” says McCarthy. “It is the story of a young man who lives a dreary, gray life. One night he has a vivid dream that connects him to a group of naturally gifted psychic voyagers known as the Dream Gang. The dream that follows changes him forever.”

A young man is transformed into a Dream Voyager while he sleeps by the mysterious Dream Gang. They are searching for a destructive dream bomb that has been implanted into one of his memories. But to find the bomb, a secret memory must be uncovered.

A Fantastic Voyage through the mind!

Dream Gang arrives on July 27 and retails for $14.99. Preorder your copy today at your local comic book store or favorite online retailer:

“A psychedelic masterpiece, from one of the architects of post-modern comics.”—Gerard Way (Umbrella Academy, True Lives of the Fabulous Killjoys)

"Dream Gang is the best thing I've read in years. A feast for the eyes, a trip for the mind.”—Bambos Georgiou (Conan, Nick Fury)

“Engaging surrealism, a fever dream of a tale that is gorgeous in its roughness and, like real dreams, leaves the reader guessing as to what the next step is in the story being told.”—Comic Book Resources

“Dream Gang is fascinating with a hook strong enough to make me want to read more.”—Major Spoilers

“Dream Gang never lacks for interesting panels. Primarily set in a dream, it takes advantage of its surreal concept to toy with backgrounds and characters.”—ComicBook.com

Posted by GenreOnline.net at 3:46 PM