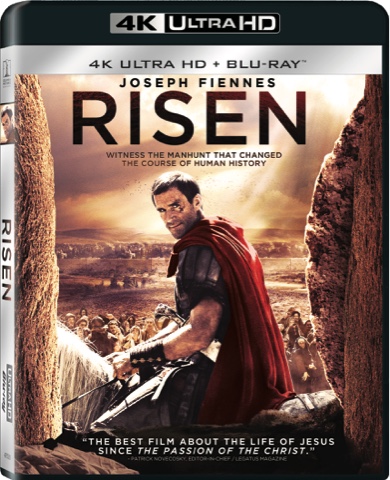 “The best film about the life of Jesus since THE PASSION OF THE CHRIST.”

Debuting on Digital May 10

Bonus content on the RISEN Blu-ray, DVD and digital formats includes three featurettes. In “The Mystery of The Resurrection: Making Risen,” director Kevin Reynolds, his cast and crew detail the making of the compelling film; in “A.D. Jerusalem,” fans learn how the production brought the ancient settings to life; and in “Script to Screen,” producers discuss the making of RISEN. Blu-ray and digital exclusive content includes deleted scenes and “The Battle of the Zealots Deconstructed,” a featurette that goes behind the scenes to see how one of the film’s most epic sequences was shot.

RISEN is the epic Biblical story of the Resurrection, as told through the eyes of a non-believer.  Clavius (Joseph Fiennes), a powerful Roman military tribune, and his aide, Lucius (Tom Felton), are tasked with solving the mystery of what happened to Jesus (Cliff Curtis) in the weeks following the crucifixion, in order to disprove the rumors of a risen Messiah and prevent an uprising in Jerusalem.

Based on the story by Paul Aiello with a screenplay by Kevin Reynolds and Paul Aiello, RISEN is directed by Kevin Reynolds. The film is produced by Mickey Liddell, Patrick Aiello, and Pete Shilaimon, with Robert Huberman and Scott Holroyd serving as executive producers.

o   “The Battle of the Zealots Deconstructed”

o   “The Battle of the Zealots Deconstructed”

RISEN has a run time of approximately 108 minutes and is rated PG-13 for Biblical violence including some disturbing images.