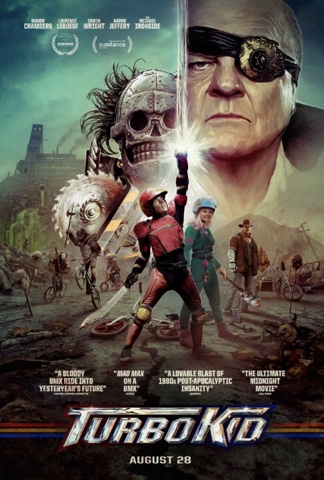 What a great little homage to the 1980s post apocalyptic b-movie knockoffs that permeated video store shelves long after the decade was over and more and yet Turbo Kid is also an homage to comic books and even a post apocalyptic superhero origin story. 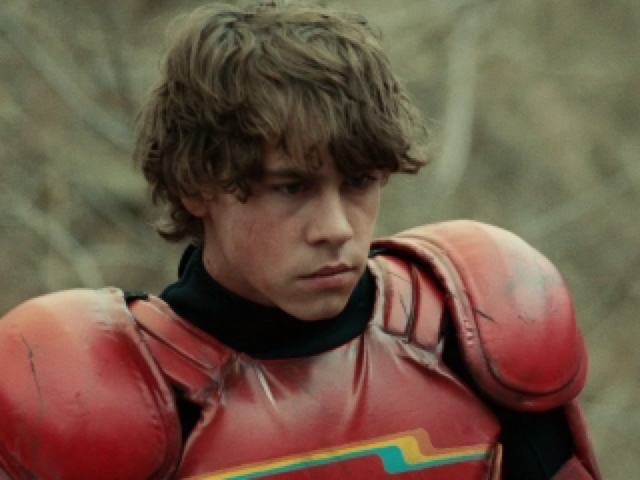 Set in the year 1997, surviving humans scavenge the remains of the old world and drinkable water is a tradable currency since it is necessary for life. The Kid (Munro Chambers) meets a beautiful wide eyed girl in the remains of a playground after returning from trading. The girl is named Apple (Laurence Leboeuf) and she immediately takes a liking to the kid and seems to latch on to everything and anything he is into. 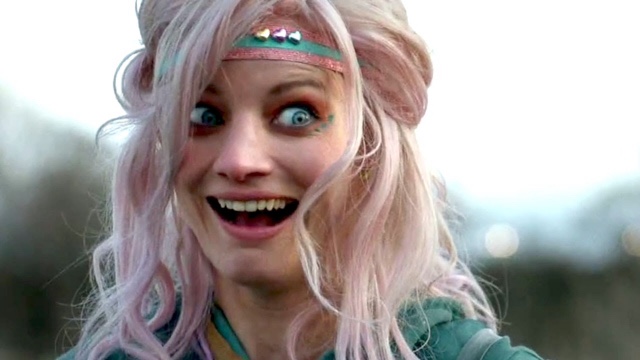 When Zeus, a warlord who controls the distribution of fresh water in return for those who will pledge their lives and enforce his law, (played with zest by b-movie veteran Michael Ironsides), decides the reign terror upon the remaining survivors in the wasteland for his own amusement, Apple is kidnapped and The Kid must save her. Coming across a bunker with a power suit like his comic hero Turbo Man, the kid journeys to the warlord's stronghold under the guise of Turbo Kid to rescue her and also forms an alliance with The Cowboy (Aaron Jeffrey), the only other man to ever stand up to Zeus and live.

Turbo Kid may sound silly, but it is actually a far smarter film than it appears on the surface. The screen direction is spot on and the action and gore is appropriately over the top to the point of dark comedy, but at the heart of this gem is your basic western motif so often used in Sci-Fi films and the filmmakers took great care to get every little nuance just right so that it feels like a straight to video film, but is light years ahead of the genre it embraces with a script that shows the filmmakers are indeed literate, following Chekov's rules of drama and adding some neat surprises as well as some poignancy to boot. The casting choices were perfect for the film. Michael Ironsides looks like he is truly enjoying himself here while Munro Chambers is quite likable as the unlikely hero and he shares great screen chemistry with Laurence Leboeuf, who lights up the screen with charisma and wit in every scene she is in. Aaron Jeffrey is solid as The Cowboy.
From the music to the sets to the purposely dated effects, Turbo Kid is a must see for genre film fans who enjoy something off beat, smart, fun, violent and sweet and it manages to pull it all off with a few surprises making this homage original onto itself. Turbo Kid is available to rent or own now on demand through streaming and subscriber television outlets.
(C) 2015 By Mark A. Rivera.
All Rights Reserved.
Posted by GenreOnline.net at 2:17 PM