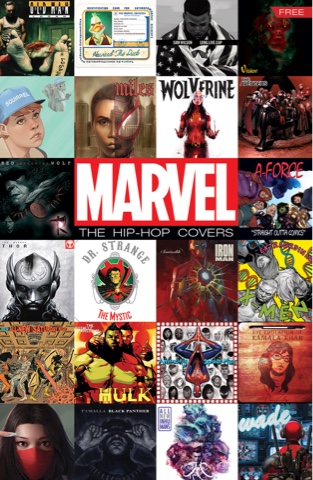 Get 14 of the Most Popular Hip-Hop Variants with this FREE Sampler!

New York, NY—November 30th, 2015—As All-New All-Different Marvel charges ahead, bringing the comics industry the most-popular characters, the biggest creators, and more – this blockbuster initiative also brought fans the red-hot sold out Hip-Hop Variant covers. Today, Marvel is pleased to announce fans will have another chance to get their hands on some of these exiting homages with the Hip-Hop Variant Sampler! Hitting comic shops on January 6th, this FREEsampler will help kick off the new year with a bang, bringing 14 of the most popular Hip-Hop Variants so back to comic shops!

“The hip-hop variants were a really special initiative that caught fire in the outside world,” says Marvel Editor-in-Chief Axel Alonso, speaking with the New York Times. “We thought this was a great opportunity to highlight that and make it available to fans for free.”

At the intersection of Marvel comics and the world of hip-hop, this unique line of variant covers inspired by some of the most iconic and well received albums of all time has garnered mass-media attention the world over. Now, Marvel is starting 2016 off by bringing these sold-out covers back to comic shops!

“The Hip-Hop Variant Sampler is our way of saying thank you to the fans, but also to the retailers who have made All-New, All-Different Marvel a massive success,” says Marvel SVP, Sales & Marketing David Gabriel. “With the Hip-Hop variant covers being such a huge draw, our goal is to draw fans back to their local comic shop after the holidays end.”

Featuring art by industry legends, rising stars, and creators behind some of the explosive new Marvel titles – this FREE sampler features the following 14 Hip-Hop Variants, reprinted and represented for fans:

Hip-Hop and Marvel unite once more, joining these two unique forces together to celebrate the exciting world of comics, and the sound of a generation. Missed out on these red-hot variants the first time? Run, don’t walk to your local comic shop to get your copy of the Hip-Hop Variant Sampler when it drops on January 6th!

Posted by GenreOnline.net at 4:54 PM