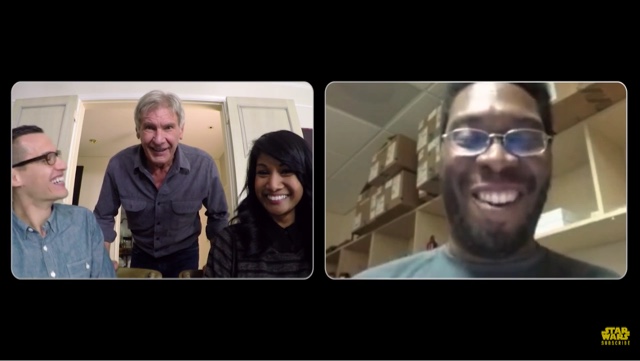 HARRISON FORD AND OMAZE SURPRISE FANS TO ANNOUNCE A CHANCE TO MEET HIM AND THE CAST AT THE PREMIERE OF STAR WARS: THE FORCE AWAKENS

Visit Omaze.com/StarWars for a chance to win

LOS ANGELES, CA, NOVEMBER 19, 2015 – Today in a special behind-the-scenes video, Harrison Ford surprised donors from around the world with the announcement of a new Omaze fundraising campaign in support of Star Wars: Force for Change’s mission to empower people to make an impact on the world around them. This once-in-a-lifetime experience will see two winners presented with tickets for them and three guests each to attend the premiere of Star Wars: The Force Awakens in either Los Angeles or London, walk the red carpet and meet the cast.

Fifteen global causes were individually chosen by J.J. Abrams, Kathleen Kennedy and the cast, which will benefit equally from the funds raised. Among the charities are UNICEF, Feeding America and Malala Fund. For as little as a $10 contribution made through the Omaze fundraising platform participants will be automatically entered for a chance to win and to help these incredible causes.

“A year and a half ago, we launched a brand new initiative called Star Wars: Force for Change that aims to inspire all of us to make a positive difference in the world,” said J.J. Abrams, Director of Star Wars: The Force Awakens, and Founder of Bad Robot Productions, “If you were among those who originally donated, thank you. But if you missed out, here’s your chance to join us. My favorite part: instead of benefiting just one cause, this time each member of the cast has nominated a cause they're passionate about.”

“The Star Wars community blew us away in the last campaign by donating more than $4.26 million for UNICEF Innovation Labs and programs,” said Ryan Cummins, Omaze Co-Founder and Co-CEO. “Omaze is honored to give Star Wars fans another once-in-a-lifetime experience thanks to Lucasfilm, Disney and Bad Robot.”

●      Two winners will get tickets for themselves and three guests each to the red carpet premiere of Star Wars: The Force Awakens in London or Los Angeles

●      They will walk the red carpet and meet the cast of Star Wars: The Force Awakens and experience the magic of Star Wars on a silver screen for the first time in ten years.

●      Airfare and accommodation in a 4-star hotel is included

By donating at Omaze.com/StarWars, fans will be supporting these fifteen charities around the world:

●      Africa Cancer Foundation — working to promote the prevention of cancer and to provide holistic solutions for people affected by cancer in Africa. Nominated byLupita Nyong'o.

●      Arts in the Armed Forces (AITAF) — bridging the cultural gap between the United States Armed Forces and the performing arts communities by bringing the best modern American theater to the military free of charge. Nominated by Adam Driver.

●      Barnardo’s UK — giving the most vulnerable and disadvantaged children the chance to reach their full potential regardless of the issues they’ve faced in their lives. Nominated by Andy Serkis.

●      Feeding America — working to feed America’s hungry through a nationwide network of 200 food banks and engaging the U.S. in the fight to end hunger. Nominated byMark Hamill.

●      Malala Fund — empowering girls through education to achieve their potential and create change in their communities. Nominated by J.J. Abrams.

●      PACER — expanding opportunities for children and youth with all disabilities, including mental health challenges such as depression and anxiety. Nominated by Carrie Fisher.

●      Phab — creating opportunities for children and adults of all abilities to enjoy life together. Nominated by Daisy Ridley.

●      The Circle — working to achieve its vision of equality for women and girls in a fairer world. Nominated byGwendoline Christie.

●      UNICEF — ensuring all children get a healthy start in life and have opportunities to reach their full potential. Nominated by Kathleen Kennedy.

●      Union of Concerned Scientists— advancing science-based solutions for our planet’s most pressing problems—from combating global warming to developing sustainable ways to feed, power, and transport ourselves.  Nominated by Oscar Isaac.

Visit Omaze.com/StarWars to learn more about these charitable causes and to enter for your chance to win.

May the Force be with you!