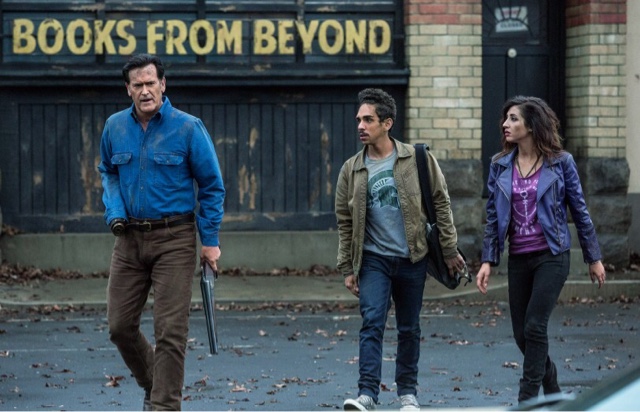 Army of Darkness on Friday, October 30 at 8pm ET/PT

Beverly Hills, Calif., October 20, 2015– Setting the stage for the premiere of the highly anticipated STARZ Original series “Ash vs Evil Dead,” Starz presents a marathon of the cult classicEvil Dead horror franchise on Friday, October 30 beginning at 8:00pm ET/PT hosted by Evil Dead star Bruce Campbell (Ash). The marathon will conclude with a sneak peek of the first episode of “Ash vs Evil Dead” at 12:15 a.m. ET/PT.

The Evil Dead marathon kicks off with the original 1981 cult classic, The Evil Dead at 8:00pm ET/PT on STARZ. This seminal horror movie features five friends who go to a cabin in the woods where they find unspeakable evil lurking in the forest. They discover the Necronomicon, the Book of the Dead, which when translated releases a legion of demons and spirits. In order to survive the night, Ash must do battle with the evil dead.

The marathon continues with the 1987 sequel, Evil Dead 2 at 9:30pm ET/PT. Ash, the lone survivor of the original demon attack, returns in the second chapter of the cult franchise. Armed with a chainsaw and a shotgun, he again must fight the evil dead when a group of strangers interrupt his romantic vacation in a lonely cabin in the woods.

The Evil Dead marathon concludes with the 1992 third installment, Army of Darkness at 10:55pm ET/PT and a sneak peek at the first episode of the STARZ Original series “Ash vs Evil Dead.” In Army of Darkness, our hero, Ash, is transported back in time to 1300 A.D. and once again faces off against the evil unleashed. In order to return to the present and get back home, he must take up his chainsaw and “boomstick” to defeat the Deadites and return the Necronomicon to its final resting place.

Fans will be encouraged to join the social media conversations throughout the night using #EvilDeadMarathon and other scene-specific hashtags that will appear within each movie.

“Ash vs Evil Dead,” the long-awaited STARZ original series and follow-up to the classic horror movie franchise The Evil Dead, premieres on Halloween, Saturday, October 31 at 9:00pm ET/PT. The series is executive produced by Sam Raimi, Rob Tapert, and Bruce Campbell, the original filmmakers of the franchise, and Craig DiGregorio who serves as executive producer and showrunner.

Campbell reprises his role as Ash, the stock boy, aging lothario and chainsaw-handed monster hunter who has spent the last 30 years avoiding responsibility, maturity and the terrors of the Evil Dead. When a Deadite plague threatens to destroy all of mankind, Ash is finally forced to face his demons – personal and literal. Destiny, it turns out, has no plans to release the unlikely hero from its “Evil” grip.

The cast is led by Bruce Campbell (Evil Dead, “Burn Notice”) in the role of Ash Williams; Lucy Lawless (“Salem,” “Spartacus”) as Ruby a mysterious figure who believes Ash is the cause of the Evil outbreaks; Ray Santiago (“Touch,” Meet the Fockers) as Pablo Simon Bolivar, an idealistic immigrant who becomes Ash’s loyal sidekick; Dana DeLorenzo (A Very Harold & Kumar 3D Christmas) as Kelly Maxwell, a moody wild child trying to outrun her past; and Jill Marie Jones (“Sleepy Hollow”) as Amanda Fisher, a disgraced Michigan State Trooper set to find our anti-hero Ash and prove his responsibility in the grisly murder of her partner.