Matthew Heineman's Film Received Both the Directing Award and Special Jury Award for Cinematography in the U.S. Documentary Competition This Year at Sundance 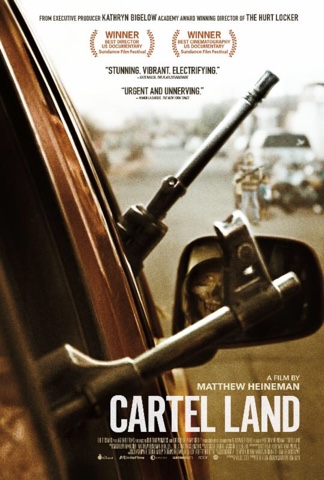 The Orchard acquired the film out of Sundance and is releasing it theatrically on July 3in New York and July 10 in Los Angeles. The film will then expand into select cities nationwide. Today, The Orchard has also unveiled the first poster for the film, which can be downloaded here.

VICE Media, the world's leading youth media company and digital content studio, has also come on board to partner with The Orchard in the promotion of CARTEL LAND.

With unprecedented access, CARTEL LAND is a riveting, on-the-ground look at the journeys of two modern-day vigilante groups and their shared enemy - the murderous Mexican drug cartels.

In the Mexican state of Michoacán, Dr. Jose Mireles, a small-town physician known as "El Doctor," leads the Autodefensas, a citizen uprising against the violent Knights Templar drug cartel that has wreaked havoc on the region for years. Meanwhile, in Arizona's Altar Valley - a narrow, 52-mile-long desert corridor known as Cocaine Alley - Tim "Nailer" Foley, an American veteran, heads a small paramilitary group called Arizona Border Recon, whose goal is to stop Mexico's drug wars from seeping across our border.

Filmmaker Matthew Heineman embeds himself in the heart of darkness as Nailer, El Doctor, and the cartel each vie to bring their own brand of justice to a society where institutions have failed. CARTEL LAND is a chilling, visceral meditation on the breakdown of order and the blurry line between good and evil. At the 2015 Sundance Film Festival, Heineman received both the Directing Award and Special Jury Award for Cinematography in the U.S. Documentary competition.

Posted by GenreOnline.net at 2:59 PM