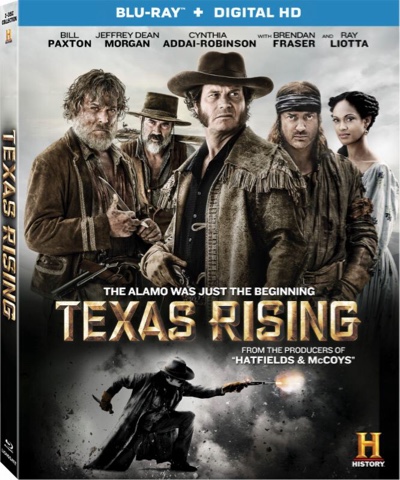 HISTORY® brings to life the thrilling, gut-wrenching and inspiring true story of how the state of Texas fought for their independence from the commanding rule of the Mexican General Santa Anna (Martinez), ultimately forming one of America's oldest and most legendary law enforcement agencies - The Texas Rangers. From rough-hewn Rangers with guns on their hips to the legendary "Yellow Rose of Texas" (Addai-Robinson), whose brains were matched only by her beauty, this is a story of the human spirit rising in the face of insurmountable odds and claiming a piece of history for themselves.

The Texas Rising Blu-ray and DVD are loaded with over 30 minutes of never-before-seen bonus material, including the "Capturing the Revolution: Filming Texas Rising" all-access featurette and two additional featurettes that look at the real lives of Sam Houston and Antonio López de Santa Anna, allowing viewers to go deep inside the thrilling historic events and behind-the-scenes of the creation of the epic mini-series. The Texas Rising Blu-ray and DVD will be available for $29.99 and $26.98 respectively.