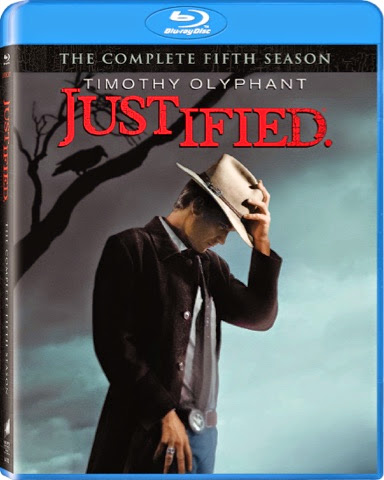 CULVER CITY, Calif. (Oct. 20, 2014) – Sony Pictures Television’s modern-day, gun-slinging police drama on FX returns when JUSTIFIED: THE COMPLETE FIFTH SEASON arrives on Blu-ray™ and DVD Dec. 2 from Sony Pictures Home Entertainment.  Timothy Olyphant (This is Where I Leave You) stars as rugged U.S. Marshal Raylan Givens in the critically acclaimed series from Sony Pictures Television and Bluebush Productions. The renegade style of justice continues in the fifth season as Raylan’s involvement in a mobster’s questionable death is under threat of being exposed. With Raylan’s future in doubt, a revenge attack unleashing a federal investigation throws the Crowes into turmoil and puts Boyd Crowder on a collision course with the law.

Both the three-disc Blu-ray and DVD sets feature commentaries on two episodes, deleted scenes and Season of the Crowe: Making Season Five, giving fans an in-depth look behind the scenes of the fifth season as the Crowes invade Harlan.   The Blu-ray is packed with exclusives including a tribute to the one and only Elmore Leonard, featuring interviews and passage readings by Robert Forster, Tony Goldwyn, Timothy Olyphant, Patton Oswalt, Danny DeVito, Adam Arkin, Walton Goggins, Dennis Lehane, Graham Yost and many more.  Also included is Patton Oswalt reading The Onion AV Club's hilarious and loving obituary for Elmore, along with an assortment of all-new featurettes giving viewers a behind-the-scenes look at some of the best moments from the season.  The fifth season is already available on EST.

The Emmy® Award-winning JUSTIFIEDreturns for its fifth season with Dewey Crowe heading north to invest a $300,000 settlement from the Marshals Service in a brothel owned by Boyd Crowder (Walton Goggins), but it isn’t long before his cousin Daryl Jr. and the rest of their Florida crime family arrive to cash in, too. As Daryl looks to consolidate the business in Harlan, Boyd’s efforts to help Ava (Joelle Carter) fix her murder trial run aground, forcing him to reach out to ruthless crime bosses from Lexington, Detroit, and even Canada and Mexico. With the Crowes complicating life in Harlan, Boyd enters into a series of ill-fated alliances that threaten to bring him down and expose Raylan Givens’ (Timothy Olyphant) involvement in a mobster’s questionable death. With Raylan’s future in doubt, a revenge attack catches Art (Nick Searcy) in its crosshairs, unleashing a federal investigation that throws the Crowes into turmoil and puts Boyd on a collision course with the law. Developed for Television by Graham Yost, JUSTIFIED is based on the short story “Fire in the Hole” by Elmore Leonard. The show is executive produced by Elmore Leonard, Graham Yost, Michael Dinner, Sarah Timberman, Carl Beverly (“Unforgettable”), Fred Golan, Don Kurt and Dave Andron. The show is co-executive produced by Chris Provenzano, Timothy Olyphant, Taylor Elmore and Benjamin Cavell