THE HIT SENSATION IS BACK! 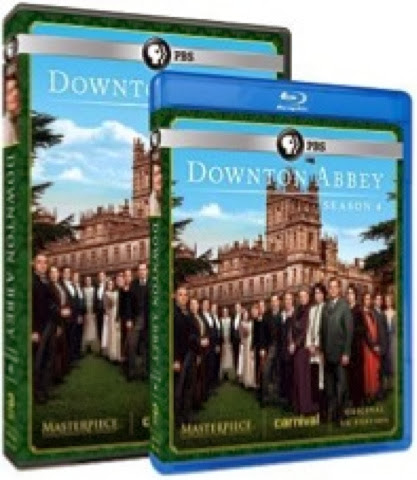 COMES TO DVD AND BLU-RAY THIS JANUARY

Available on DVD and Blu-ray from PBS Distribution January 28th

“DOWNTON ABBEY SEASON 4” airs Sundays on MASTERPIECE on PBS from January 5, 2014 to February 23, 2014. The DVD SRP is $49.99 and the Blu-ray SRP is $54.99. The run time is approximately 8.75 hours on three discs. The DVD and Blu-ray sets contain all of Season 4, including the finale. The DVD and Blu-ray feature the original U.K. edition of Season 4 and more than 30 minutes of bonus video. The program will be available for digital download.

Written and created by Julian Fellowes,“DOWNTON ABBEY SEASON 4” is a Carnival Films/MASTERPIECE Co-Production. Carnival is a division of NBCUniversal International Television Production. The series’ many accolades include 10 Emmys®, two Golden Globes®, and a coveted Screen Actors Guild Award® for the ensemble cast.

Viewership and social media buzz have been soaring since the series launched in January 2011. Season 3 reached a record 24.1 million viewers, more than any other drama in the history of PBS, and the season had the highest Twitter buzz ever for public television.

All who tuned in last season know that Matthew Crawley – heir to Downton Abbey, husband to Lady Mary (Dockery), and brand new father to a baby boy and successor – lies dead on a country road next to his overturned roadster. On top of this, the family is still grieving over the death in childbirth of Sybil, Mary’s youngest sister, who also left a baby behind.

Season 4 opens six months later. Although it is the 1920s, Britain still observes mourning rituals that are almost Victorian in their solemnity. Nonetheless, the Crawleys are beginning to snap out of it: Robert, Lord Grantham (Bonneville), must manage the estate without his canny son-in-law; Cora suddenly faces a staffing crisis; Violet, who has seen enough tragedy, knows how to recoup quickly; Isobel (Wilton), Matthew’s mother, may never recover; Edith (Carmichael), who was jilted at the altar, tempts scandal with a new beau; and Mary now finds herself the most desirable widow in Yorkshire.

The servants also pick up, buck up, and get on with it – with new arrivals, departures, rivalries, and betrayals among the downstairs staff. Life goes on at Downton Abbey.

Written and created by Julian Fellowes,“DOWNTON ABBEY SEASON 4” is a Carnival Films/MASTERPIECE Co-Production. The series is executive produced by Gareth Neame, Julian Fellowes and Liz Trubridge. Nigel Marchant is co-executive producer. Rupert Ryle-Hodges is the producer. The first episode is directed by David Evans. Other episodes are directed by Catherine Morshead, Philip John, Edward Hall, and Jon East.

Posted by GenreOnline.net at 2:05 PM