Yellow Jackets Season One of The Critically-Acclaimed Series Arrives On DVD on July 19 With Two Exclusive, Never-Before-Scene Featurettes 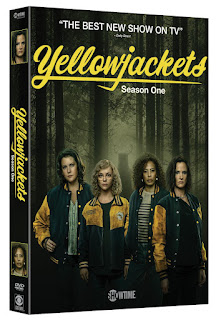 Season One of The Critically-Acclaimed Series Arrives On DVD on July 19 With Two Exclusive, Never-Before-Scene Featurettes

“YELLOWJACKETS is a hell of a good survival story, a hell of a good mystery story, and has its fair share of horrifying moments. What it's also got--so many current shows don't--is sharp characterization and a mordant sense of humor.”

“Your Next TV Obsession”

“Top of our must watch - and must discussed - list”

HOLLYWOOD, Calif. - April 26, 2022 - The “darkly delightful” (Decider), YELLOWJACKETS: SEASON ONE, arrives on DVD on July 19, 2022, from Showtime®, CBS Home Entertainment and Paramount Home Entertainment. Led by a powerful, female ensemble cast including, the “riveting” (Collider) 10 episode series has been featured in nearly 50 “Best of the Year” lists and is one of the most buzzed about new TV series of 2021.

YELLOWJACKETS: SEASON ONE is equal parts survival epic, horror story and coming-of-age drama and tells the narrative of a team of wildly talented high school girls soccer players who become the (un)lucky survivors of a plane crash deep in the

remote northern wilderness. The series chronicles their descent from a complicated but thriving team to savage clans, while also tracking the lives they’ve attempted to piece back together nearly 25 years later, proving that the past is never really past and what began out in the wilderness is far from over.

This 4-Disc collection features every shocking episode from the first season, along with two exclusive featurettes that will take you deeper behind the scenes with the cast and crew:

● Yellowjackets: The Female Lens - We will hear from the star-studded cast and creators as they break down the making of Yellowjackets, highlighting the female-centric story.

● Yellowjackets: Favorite Moments - This compilation of the buzziest Yellowjackets moments will include exclusive interviews from the cast and crew as they reflect on impactful scenes throughout the season.

The YELLOWJACKETS: SEASON ONE DVD is presented in widescreen format. The DVD offers English 5.1 Dolby Digital Audio and includes English SDH subtitles. The series will also be manufactured-on-demand on Blu-ray.

Posted by GenreOnline.net at 12:22 PM