JUST IN TIME FOR FATHER’S DAY, OWN THE CLASSIC ADVENTURE IN A LIMITED-EDITION 4K ULTRA HD BLU-RAY™ STEELBOOK® 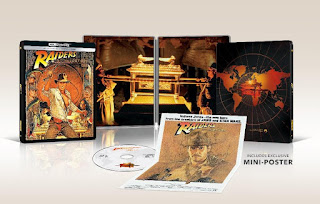 The epic search for the perfect Father’s Day gift ends on June 14, 2022 when Raiders of the Lost Ark arrives in a Limited-Edition 4K Ultra HD Blu-ray SteelBook from Lucasfilm Ltd. and Paramount Home Entertainment.

Available individually on 4K Ultra HD for the first time, the Raiders of the Lost Ark SteelBook is the first of four planned limited-edition releases of each Indiana Jones movie.  Fans of the franchise can look forward to collecting Indiana Jones and the Temple of Doom on July 12, Indiana Jones and the Last Crusade on August 16, and Indiana Jones and the Kingdom of the Crystal Skull on September 20. With exclusive packaging celebrating the iconic original theatrical artwork, these collectible releases are sure to be a hit with fans.  The films are presented in 4K Ultra HD with Dolby Vision® and HDR-10 for ultra-vivid picture quality and state-of-the-art Dolby Atmos® audio*.   Each SteelBook also includes access to a digital copy of the corresponding movie, as well as a mini-poster reproduction.

Get ready for edge-of-your-seat thrills in Raiders of the Lost Ark. Indy (Harrison Ford) and his feisty ex-flame Marion Ravenwood (Karen Allen) dodge booby-traps, fight Nazis and stare down snakes in their incredible worldwide quest for the mystical Ark of the Covenant. Experience one exciting cliffhanger after another when you discover adventure with the one and only Indiana Jones.