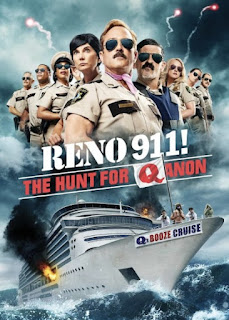 The original cast of the Emmy®-nominated* Comedy Central series returns for hijinks on the high seas in the ridiculously funny RENO 911! THE HUNT FOR QANON, arriving on DVD July 19, 2022 from Paramount Home Entertainment.

Starring Thomas Lennon, Robert Ben Garant, Kerri Kenney-Silver, Cedric Yarbrough, Carlos Alazraqui, Wendi McLendon-Covey, Niecy Nash, Mary Birdsong, and Ian Roberts, RENO 911! THE HUNT FOR QANON reunites the cast of the hilarious hit show, which was one of the highest-rated series in Comedy Central history.  RENO 911! THE HUNT FOR QANON is the first “Reno 911!” movie since Reno 911! Miami in 2007.

The deputies from the Reno Sheriff’s Department are on a mission to track down the one and only Q behind all QAnon conspiracies.  Ordered to serve court papers to the mysterious Q, the team goes deep undercover on Q's Booze Cruise (mostly just for the free cruise).  They ultimately escape only to discover they’ve landed at Jeffrey Epstein’s old island.

The RENO 911! THE HUNT FOR QANON DVD includes 10 deleted scenes.