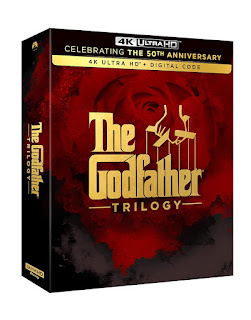 It occurred to me recently that if it were not for The Godfather, the golden age of cinema that was the 1970s may never have occurred. Francis Ford Coppola, like many famous and respected filmmakers that followed him, got his big break directing Dementia13 for Roger Corman, which helped get his foot in the door so to speak, but it would not be until his dream of establishing American Zoetrope, which gave us filmmakers like George Lucas, Walter Murch, Brian DePalma and John Milius to name just a few that would captivate audiences as the generation from film school, which was a new concept at the time, that a process that inspired the filmmakers of my generation and so each generation of cineastes is effected by the previous. Where would we be without Polanski, Goddard, Fellini, Kurosawa, Zanuck, Wilder, Hawks, Kubrick, Chaplin and so many others? I tell you all that had not the stars aligned in such a way that Coppola, hot off of his Oscar win for writing the screenplay for Patton, but in debt because his last films had not been box office successes that would come as a result of The Godfather and the artistic control he would command as an Auteur, and had he not helped Mario Puzo craft his controversial, but best selling novel into a screenplay about the duality of family duty and as it relates to and is reflected by the American Dream, cinema as we know it would possibly be very different. Look at the cast with Marlon Brando, Al Pacino, Robert Duval, James Caan, and John Cazale and so many others like character actor Joe Spinell, where would popular cinema be? If much of science fiction and horror literature owes a great debt to HP Lovecraft, I state the same is true of cinema when it comes to Francis Ford Coppola and The Godfather.

Everything that has followed in it’s wake is not only cinema history, but it all goes back to the vision and collaboration that turned a book into a cultural phenomenon. Coppola’s 1970s filmography, which would include The Conversation, The Godfather Part II and Apocalypse Now and these all are arguably his best work and that is not to state that what followed was not noteworthy. It simply is in my opinion that Coppola’s work in the 1970s was for me anyway, a master filmmaker at the height of his craft and while not all filmmakers are Masters and the term may sound elitist and extremely subjective, I still contend his work has earned him the title of Master in my opinion and while he is not the only American Master Filmmaker, he is one of the best just for his body of work in the 1970s alone.

It seems as though for the last few decades, there has been a video event related to the release of The Godfather and it’s sequels whether it is on VHS, LaserDisc, DVD, Blu-ray Disc and now to celebrate the film’s fiftieth anniversary, 4K Ultra HD Blu-ray Disc. I remember seeing the trailer for The Godfather Part III in the theater, I was struck by how the opening presenting footage from the first two films were so dark, but richly textured. Up until that point I only had seen The Godfather in it epic chronological TV miniseries like form, which I remember literally watching in my parents livingroom and cutting out the commercial breaks so that in the end my father and I could look back at this broadcast version commercial free and as great as it was back in 1982 to be able to do that, I realized in 1990 that watching The Godfather recorded off broadcast television on VHS was like watching half a movie because the video format and the nature of television back then just could not convey the subtleties in picture quality even the theatrical trailer illustrated with it’s inclusion of scenes from the first two films back in 1990. As great as the subsequent LD, DVD and even BD releases have been, I don’t think anything has captured that realization and spectacle for me until now with Paramount Home Entertainment’s 4K UHD Blu-ray Disc box set release of The Godfather Trilogy, which includes a code for an additional 4K iTunes digital copy of the film in an insert within the box set.

Unlike any set that has come before it, The Godfather Trilogy 4K UHD Blu-ray Disc Box Set brings together what will be considered to be the definitive presentation of the complete series from here on moving forward on physical media. One not only gets the theatrical cuts of all three films, but in the case of The Godfather Part III, one has gets the 1991 cut and the definitive conclusion to the trilogy as both Coppola and Puzo envisioned it, The Godfather Coda: The Death Of Michael Corleone.

Along with the previously released legacy content, this new set includes an introduction by Francis Ford Coppola, a look at the preservation and evolution of the films through various home entertainment incarnations, featurettes on the production design, home movies and restoration comparisons too. The only weak link is the digipack packaging for the discs within the box set, they sound have released it in a BD keep case like The Coppola Restoration Blu-ray release from

2008. Dolby ATMOS Sound elevates the picture restoration to near home entertainment perfection if such a thing is possible.

Posted by GenreOnline.net at 4:56 PM