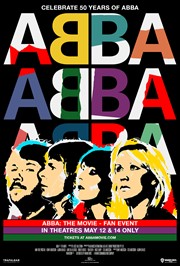 What: The newly remastered “ABBA: The Movie” dances back into movie theaters to celebrate 45 years since its original release and 50 years since the Swedish pop sensation was formed.

View a performance clip of “Dancing Queen” HERE and of “Waterloo” HERE.
The official trailer can be viewed HERE. For the teaser trailer, click HERE.
Tickets are on sale now at www.ABBAmovie.com
WHO:
Starring ABBA’s Anni-Frid Lyngstad, Benny Andersson, Björn Ulvaeus, and Agnetha Fältskog; directed by Lasse Hallström (“What’s Eating Gilbert Grape,” “Chocolat,” “Dear John”); and presented in cinemas by Trafalgar Releasing and Warner Bros.
WHEN:
Thursday, May 12 and Saturday, May 14.
WHERE:
“ABBA: The Movie – Fan Event” is coming to approximately 450 cinemas in the US and Canada. For local listings, visit www.ABBAmovie.com.
MORE:
“ABBA: The Movie – Fan Event” will take attendees on a flashback journey to the 1970s when disco reigned supreme, and ABBA were international pop royalty.
The film stars the members of ABBA and was captured by director Lasse Hallström during the group’s mega-successful 1977 Australian tour. The now cult-classic music film provides a rare look at the hugely popular group during the height of their popularity and includes backstage footage as well as full-length performances of some of ABBA’s greatest hits including "Dancing Queen," "Tiger," "Name Of The Game," and "Eagle.”
The movie’s subplot is a mockumentary-style story of a country radio disc jockey who attempts to land an interview with the band. As deadlines loom—it is a slapstick mix of happenstance and error by the young DJ who is tasked with getting the coveted interview while ABBA’s dedicated bodyguard does everything he can to stop it from happening.
“ABBA: The Movie” DCP was remastered from IP and scanned at 2K resolution. During the remastering process, dirt, scratches, and stains were digitally removed and the audio was restored to provide an “A” quality representation of the film. The remaster was completed at Motion Picture Imaging on the Warner Bros. studio lot.
Posted by GenreOnline.net at 4:48 PM