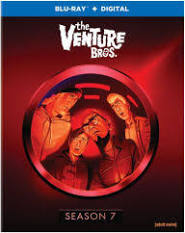 The Venture Bros. is Adult Swim’s longest running animated series with season seven continuing the “Johnny Quest” like adventures for adults with Team Venture rallying against PROgressive Biological Life Extension Module or PROBLEM having taken over VenTech Tower with Venture Sr.’s disembodied head locked within and s hazardous blizzard coming down upon them. Available on either DVD or Blu-ray Disc, Series Creators Jackson Publick and Doc Hammer provide commentary for all ten series seven episodes in addition to deleted and extended scenes. The Venture Bros. Season Seven will debut on Blu-ray Disc and DVD, but sold separately on Tuesday June 4, 2019 courtesy of Adult Swim and Warner Brothers Home Entertainment.