Along with new Star Wars and Marvel Cinematic Universe movies and television shows, over this past decade Disney has revisited many of it’s animated and iconic classics and produced live action adaptations of many. Dumbo is among the more recent ones and it is directed by Tim Burton, who identified with the misfit or outsider theme that discovers a way to be more positively extraordinary than anyone could ever imagine. It is a theme Burton seems to know well when one looks at his filmography with an introspective eye and for those who don’t, think of Rudolph The Red Nose Reindeer only instead of saving Christmas, Dumbo saves a family, which by extension includes the circus, which is in of itself an extended family. In both cases unscrupulous people are trying to breakup the family in both forms noted above as well as Dumbo’s being empowers the family to reunite Dumbo with his Mother and his extended jumbo elephant family too.

The film eliminates the songs and talking animal characters while still acknowledging their memory in the form of visual nods and dialogue. The look of the character of 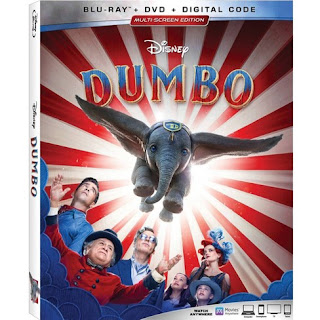 Dumbo is slightly exaggerated toward Burton’s unique style of characters and the production design captures an at times almost water colored storybook quality that feels appropriate for the film. Several alumni from other Tim Burton pictures appear in the film, including Danny DeVito, Michael Keaton, and Eva Green. Colin Farrell and Alan Arkin also star in the movie.

The Blu-ray Disc features a beautiful and crystal clear 1920 by 1080p (1.85:1) widescreen full HD presentation, which looks even more gorgeous when upscaled to Ultra HD 2160p resolution. I detected that the aspect ratio on my TV appeared a bit different than (1.85:1) with slight black bars above and below the image, but I can’t determine what the aspect ratio was exactly nor can I compare it to another unconverted presentation because I only have one UHD TV to screen films on. There is also a movie-only DVD included, but compared to the UHD upscaled Blu-ray, the standard definition presentation looked washed out. I found the same to be true of the DVD presentation included within the new Blu-ray release of the animated Cinderella, but I will cover that release in a separate review.

An excellent English DTS-HD MA 7.1 Soundtrack mix is provided along with an English Descriptive Audio Track for the Hearing Impaired. The DVD differs only that it includes 5.1 Dolby Digital English Soundtrack instead of DTS-HD MA. Both presentations also include French and Spanish Language Dolby Digital 5.1 Surround Soundtracks along with English Subtitles for the Deaf and Hearing Impaired as well as French and Spanish Language Subtitles encoded as options. An insert containing a limited time only redeemable code for a Movies Anywhere Digital Copy is also included within the blue BD case.

The main menu for both the Blu-ray and DVD presentations features motion images from the film and are easy to navigate. Also exclusive to the Blu-ray release are extra value content that includes a music video (2:58), nine deleted scenes that can be viewed individually or as one reel with a “Play All” option (7:47) as well as featurettes covering the Easter Eggs within the film (3:52), production design (7:40), character design (5:50) and motion capture, behind-the-scenes cast and crew interview clips (8:20) and a blooper reel (1:57). Coming soon trailers for Frozen II (2:07) and the live action version of The Lion King (1:40) are included on both the Blu-ray and DVD presentations of the film and wrap up the bonus features within the set.