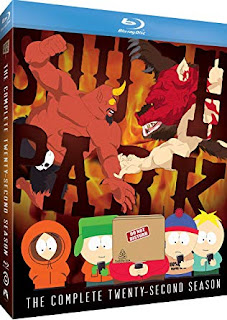 It is amazing for me to think that South Park has been broadcasting first-run episodes on Comedy Central for twenty two years. Always topical and never one to shy away from controversy, Trey Parker and Matt Sone, who also provide mini audio comments for all ten twenty second season episodes, have kept the show fresh, funny and satirical in a way that is smart yet never overt. Thus it appeals to viewers in many demographics. Storylines involve Cartman, Stan, Kyle and Kenny celebrating an unusual Halloween, getting super cereal with Al Gore and trying to win first prize in the town’s bike parade. A #SocialCommentary feature is included on all episodes.

South Park is like watching one’s favorite baseball team, whether they win or lose, in the eyes of the fans, Matt and Trey always hit a home run. South Park: The Complete Twenty Second Season is available on Blu-ray Disc now courtesy of Comedy Central Home Entertainment and Paramount Home Entertainment.