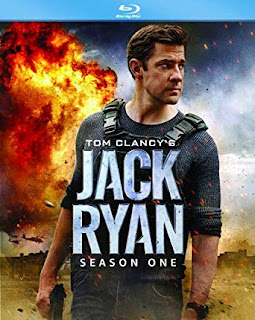 Tom Clancy’s Jack Ryan stars John Krasinski as the iconic CIA analyst is perhaps not only some of the best Spy-Fi on streaming television, but it is the best Jack Ryan storytelling since A Clear And Present Danger starring Harrison Ford. Jack Ryan (Tom Krasinski) is lured into an investigation of bank transfers and places him in a search throughout Europe and the Middle East where  rising figurehead is preparing for a terrorist attack on the United States and her allies.

All eight episodes of the series, which streams on Amazon Prime Video are presented in their television widescreen streaming aspect ratio in 1080p full HD across two Blu-ray Discs and features deleted scenes as well. A three-disc DVD set is also available, but sold separately. Tom Clancy’s Jack Ryan: Season One will debut on Blu-ray Disc at retailers on and offline courtesy of Paramount Home Entertainment on Tuesday, June 4, 2019.