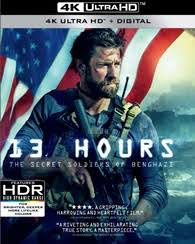 John Krasinski stars in this engrossing drama directed by Michael Bay where he plays one of six Elite Operatives assigned to protect CIA assets in the Benghazi U.S. diplomatic compound on September 11, 2012 against overwhelming odds. I have to be honest and state that while the men who valiantly gave everything to protect CIA operatives is not one that should go unremembered and these men deserve all the honors in the world, I am critical of what the United States as a nation allowed to happen. The consequences have lead to the migrant crisis in Europe because of the regime change.

The 4K UltraHD Blu-ray Edition of 13 Hours: The Secret Soldiers of Benghazi presents a vivid high dynamic range color palette in 2160p resolution with Dolby ATMOS Sound for an immersive audio experience. A 1080p Full HD copy of the film is also provided along with a limited time redeemable code for a digital copy of the film too. The Blu-ray also features behind-the-scenes production footage that reveals in detail how Michael Bay with the help of the Ex-Military Operatives were able to recreate the events from the attack along with footage behind-the -scenes with members from the Cast and Crew. 13 Hours: The Secret Soldiers of Benghazi will debut on 4K UltraHD Blu-ray Disc with Digital Copy on June 11, 2019 at retailers on and offline courtesy of Paramount Home Entertainment.