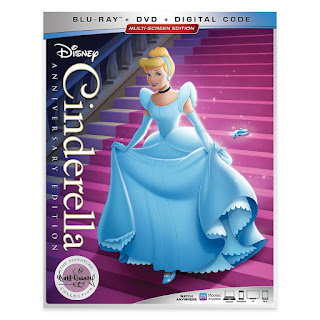 Now I think most people are familiar with the premise of the film so I am not going to discuss that because in my opinion this is really the story of how Walt Disney brought Cinderella to the screen in a manner never before seen. So here the extra value features are more interesting to me than the film itself because everyone knows it is one of Disney’s many animated masterpieces and deservedly so. I just want to detail what you get with this set and hopefully those who were thinking of upgrading or have not yet purchased it will go out and buy it when it streets at retailers on and offline on Tuesday, June 25, 2019 courtesy of Buena Vista Home Entertainment.

The film is presented on Blu-ray in the original (1.33:1) aspect ratio of it’s theatrical exhibition. This surprised me because Disney was a visionary and he shot TV shows in color before anyone owned a color TV set as one example so considering this is a film from around 1950, I expected it to be widescreen though Disney has the viewer covered in many ways. Absolutely a must viewing mode is the In Walt’s Words: The Envisioning of Cinderella mode because it uses the entire 16 By 9 real estate to present photographs, storyboards, concept art and more as one hears commentary recorded of Disney discussing the project with the team of animators who made it happen and much more. This version of the film is worth the price of buying this media release alone. There is also a viewing mode where the bars to the left and right of the feature have been filled in almost like ever changing curtain designs in a virtual movie theater experience. Finally there is the normal academy aperture presentation presented in 1080p full HD with accompanying English DTS-HD MA 7.1 Sound, a 2.0 and a 1.0 Soundtrack in English too, which hopefully should satisfy those who prefer to hear it in the original theatrical release and theatrical rerelease versions with the sound intact. French and Spanish Language Dolby Digital 5.1 Surround Soundtracks are included on both the Blu-ray Disc and DVD versions along with EnglIsh Subtitles for the Deaf and Hearing Impaired and French and Spanish Language Subtitles encoded as options for both discs. The DVD features both an English Dolby Digital 5.1 Surround Soundtrack as well as an English Monaural Soundtrack.  The picture quality on the DVD looks a bit washed out when upscaled to Ultra High Definition. Both discs also feature animated motion scene main menus that are nearly identical. In addition to all of this, a limited time redeemable code for a Movies Anywhere Digital Copy is available on an insert within the Blue BD packaging.

The extensive bonus features include an introduction (1:16) from the Disney Museum located at the Presidio in Northern California, a making of documentary (38:28), a look at the Cinderella that never was (12:34), The Magic of the Glass Slippers: A Cinderella Story, a black and white silent animated short Laugh-O-Gram (7:24), a behind-the-magic Disney Princess Fantasy Land Featurette (8:17), a profile on the art of Mary Blair (14:56), one of my favorite critics I watched growing up, Joel Siegel discussing the film (22:09), Storyboard-To-Film Comparisons (4:49), an alternate storyboarded opening sequence (1:13), a look at the actress who provided the archetype and voice for the fairy godmother (11:50), a reel of trailers from the various theatrical releases that can also be viewed as one reel (9:07), three radio spots (2:55), Ilene Stanley’s appearance on The Mickey Mouse Club (3:55), trivia (4:48), and trailers for Toy Story 4 (1:43) and a preview for the 4K Ultra HD release of The Little Mermaid.

(C) Copyright 2019 By Mark A. Rivera
All Rights Reserved.
Posted by GenreOnline.net at 2:19 PM