The Eyes Start the Season off with a Thrill! 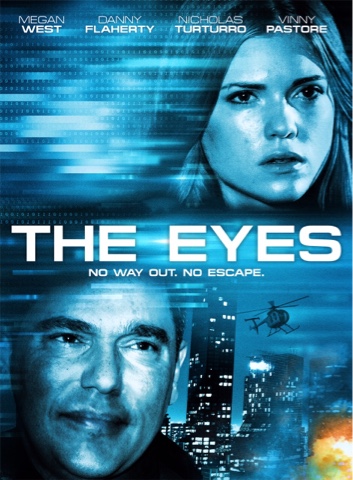 THE EYES Available Now on DVD and Amazon streaming!

LOS ANGELES, CA – The suspenseful thriller, THE EYES, is available on DVD and Amazon streaming.   The film stars Nick Turturro (“Blue Bloods”, Paul Blart: Mall Cop 2), Vincent Pastore (“The Sopranos”), Danny Flaherty (“The Americans”), Megan West (“How to Get Away with Murder”), Ana Isabelle (“Seasons of Love”), Greg (“Klarity”) Davis, Jr. (Toni Braxton: Unbreak My Heart), Steven Hauck (The Amazing Spiderman 2) and Carly Steel (Mordecai).  The film was written by Robert T. Roe and directed by Robbie Bryan and produced by Good To Be Seen Films.

Some say we are only as sick as our secrets but what if someone really knew those secrets?  What if they’ve watched every move we’ve made and our secrets aren’t really hidden?  In The Eyes, six strangers with unspeakable pasts wake up imprisoned in an abandoned warehouse and discover they are being forced to participate in an evil experiment.  Five must die. One can live. And THEY have two hours to decide amongst themselves who survives. The clock is ticking and if they don’t decide… they ALL die.  The Eyes shows us that someone is always watching.

The DVD release includes two indie-film must extras. A featurette about the making of the film as well as the unusual roadblocks that were presented during production.  The featurette also includes a first-look with the cast and crew.  The second extra is a commentary track with director Robbie Bryan, producers Spero Stamboulis and Christie Botelho as well as some of the cast including Greg Davis, Jr.

Parade Deck Films is a veteran-owned and operated film sales and distribution company based out of Portland, Oregon, driven by a passion and love for films. Our focus is to distribute independent films of all genres among all digital platforms and physical formats to new and wide audiences around the world, while giving back to the community and supporters of independent filmmaking. We strive to provide easy access to the best of independent film for fans, a great partnership for artists, and an unparalleled outlet for those most passionate about film as a whole. With the purchase of every film on DVD and Blu-ray, we will donate a portion of the proceeds to veteran organizations that help our heroes battle PTSD and their transitions home.

Posted by GenreOnline.net at 10:56 AM