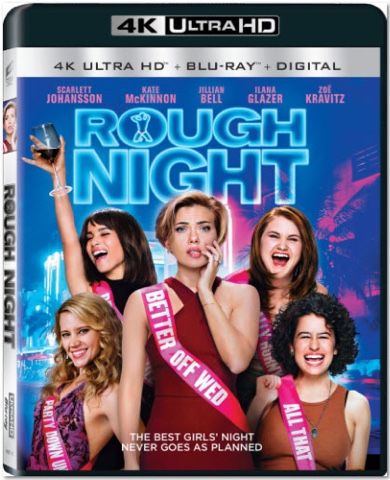 Star in the Hilarious Comedy from the Writers of “Broad City”

Get the Party Started Early on Digital Friday, August 25

Five best friends from college (Johansson, McKinnon, Bell, Glazer and Kravitz) reunite 10 years later for a wild weekend getaway in Miami. Their outrageous antics and hard partying result in hilariously unexpected consequences, which land them in a seemingly impossible situation to escape.

·         Gag Reel – Laughing along with the ladies of Rough Night in this hilarious collection of outtakes!

·         Improv-O-Rama – Catch all the improv alternate lines of dialogue in this Improv-line-o-rama!

·         “Killer Cast” Featurette – Hear from your favorite cast of ladies as they discuss their first impressions and favorite parts of the film.

·         “The Dynamic Duo: Lucia and Paul” Featurette – Lucia Anillo and Paul Downs discuss their past projects and how this one came to be.

·         “Playing Dead” Featurette – Learn more about Jay-the-fake-stripper and hear from the cast and crew about working with and casting him.

·         “Do a Little Dance” Featurette – In this special feature, learn about the work behind the scenes that made this dance number “b’genius."

ROUGH NIGHT has a run time of approximately 101 minutes and is rated R for crude sexual content, language throughout, drug use and brief bloody images.