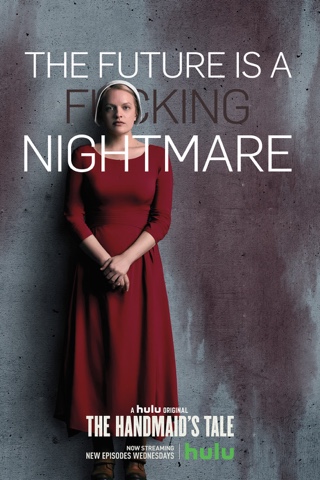 A few weeks ago I revisited the 1990 feature film version of Margret Atwood's The Handmaid's Tale, which is just as valid today if not more so in the predictive programming scope of an America that has gradually allowed itself to apathetically give up it's civil and human rights under a totalitarian theocracy where women are not allowed to read, work or own anything. Their bank accounts are frozen along with most of the country's citizens as the new government consolidates it's power through implied false flag attacks on American cities and the execution of congress.
Religious persecution of Catholics is rampant as the new government only recognizes the Old Testament of the Bible and uses it as a justification for the harsh penalties placed upon it's citizens. For reasons no one is completely certain, the population of the world has diminished and sterility is rampant. In order for this government to survive, it needs children to indoctrinate. Thus fertile women are conscripted and brainwashed into becoming Handmaids. Handmaids serve the elite and powerful of this society by acting as surrogates to conceive children for the elite assignments they are sent to. Typically a Handmaid is given three assignments. If she does not conceive within these three appointments, she is sent to a place referred to as the Colonies, where the undesirables of this society are worked to death cleaning toxic wastes. Few survive a year there.

Offred (Elisabeth Moss) is a Handmaid in

the Commander’s household. Offred navigates between Commanders, their cruel Wives, domestic Marthas, and her fellow Handmaids – where anyone could be a spy for regime – all with one goal: to survive and find the daughter that was taken from her.

This is probably one of the most chilling dystopian science fiction series running on streaming television outside of The Man In The High Castle. There are some departures from the book, but in some ways I found the series more faithful too. How this will progress into an ongoing series beyond one season is a bit of what troubles me about the show though with ten episodes planned for this season, I am guessing there will have to be departures to open up the world from the book without it becoming repetitive. The first three episodes are now streaming on HULU with the fourth and others to follow  in the coming weeks. This is intended for mature audiences and is not child friendly so parental discretion is strongly advised.  Atwood is a participant in the series presentation. The Handmaid's Tale is streaming now only on HULU.

Posted by GenreOnline.net at 6:27 PM