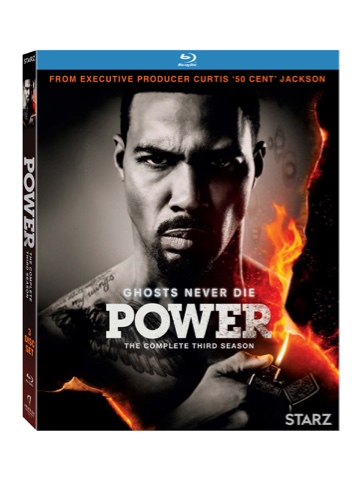 SANTA MONICA, CA (April 20, 2017) – Starz’s most watched series ever returns when “Power: The Complete Third Season” arrives on Blu-ray and DVD on June 13 from Lionsgate. With record-breaking ratings for its premiere, season three — with its all-star cast, including Omari Hardwick (TV’s ”Being Mary Jane”), Curtis “50 Cent” Jackson (The Hangover), and Naturi Naughton (TV’s “Mad Men”) — finds James St. Patrick fighting to maintain his new lifestyle on the right side of the law.

From Executive Producer Curtis “50 Cent” Jackson and show creator Courtney A. Kemp (“The Good Wife”) comes season three of the hit drama “Power.” Will James St. Patrick’s dream of leaving the drug game and finding love with the woman sworn to bring him to justice end before it begins with the specter of “Ghost” coming back to haunt him? Be careful what you wish for.

Coming off the second season’s heart-stopping cliffhanger, “Power: The Complete Third Season” Blu-ray and DVD special features include a recap of season two and an inside look at the making of the show, and will be available on Blu-ray and DVD for $59.99 and $49.98, respectively.