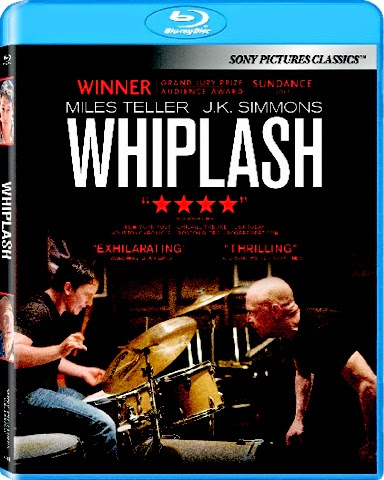 Winner of both the Audience and Grand Jury Prizes at the 2014 Sundance Film Festival, WHIPLASH was first screened at the festival as a short film a year earlier to excellent reaction.  Chazelle returned a year later with a full-length version, which captured the top prizes in Park City and continued on as a festival favorite throughout the year. Film critics took to the film immediately, as evidenced by a 95 percent rating on Rotten Tomatoes. Variety’s Peter Debruge wrote that “[WHIPLASH] demolishes the clichés of the musical-prodigy genre, investing the traditionally polite stages and rehearsal studios of a topnotch conservatory with all the psychological intensity of a battlefield or sports arena.” In addition, Rolling Stone called the film “electrifying,” and Peter Traversproclaimed that WHIPLASH is “A spellbinder. Miles Teller and J.K. Simmons will blow you away.”

WHIPLASH bonus features include commentary with J.K. Simmons and Damien Chazelle and a Toronto International Film Festival Q&A with Miles Teller, J.K. Simmons and Damien Chazelle. Exclusive to the Blu-ray is the original short film the movie was based on and a deleted scene, both of which include optional commentary and a 42-minute documentary featuring famous drummers who share stories and discuss their passion for the craft including Chad Smith, Peter Erskine, Gina Schock, Doane Perry and many more.

SYNOPSIS
Andrew Neiman (Miles Teller) is an ambitious young jazz drummer, single-minded in his pursuit to rise to the top of his elite east coast music conservatory. Plagued by the failed writing career of his father, Andrew hungers day and night to become one of the greats. Terence Fletcher (J.K. Simmons), an instructor equally known for his teaching talents as for his terrifying methods, leads the top jazz ensemble in the school. Fletcher discovers Andrew and transfers the aspiring drummer into his band, forever changing the young man’s life. Andrew’s passion to achieve perfection quickly spirals into obsession, as his ruthless teacher continues to push him to the brink of both his ability—and his sanity.

·         An Evening at the Toronto International Film Festival with Miles Teller, J.K. Simmons and Damien Chazelle

·         Timekeepers – Famous drummers discuss their craft and passion for drumming